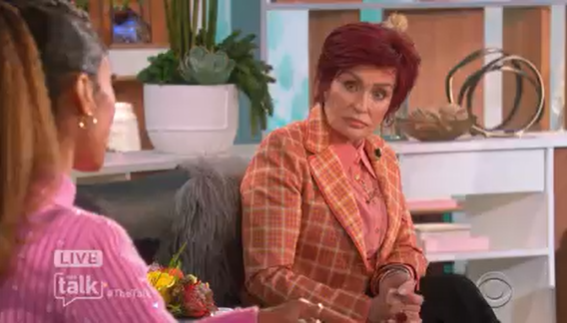 CBS has suspended live episodes of its daytime panel show The Talk until Tuesday, March 23 as the network launches an investigation into events that transpired on the show after co-host Sharon Osbourne passionately defended longtime friend Piers Morgan against accusations of racism last week.

The network originally suspended just two days of episodes (yesterday, March 16, and Wednesday, March 17) following a heated debate between Osbourne and co-host Sheryl Underwood regarding Osbourne’s support of Morgan, who remarked on Good Morning Britain that he didn’t believe Meghan Markle, the Duchess of Sussex, when she said in an interview that she had considered suicide when unhappy with her life in Britain’s royal family.

In defending Morgan, Osbourne used words that were bleeped out, and said she felt like she was being placed on “the electric chair” for having a friend that some people feel is racist.

Osbourne later tweeted an apology saying she “panicked,” “felt blindsided” and then “got defensive” during her exchange with Underwood.

To add fuel to the fire, there’s new reporting out from journalist Yashar Ali, who got former Talk co-host Leah Remini to say on the record that Osbourne frequently used racist and homophobic language while speaking about her former colleagues on the CBS panel show. She allegedly referred to then-co-host Julie Chen, who is Chinese American, as “wonton” and “slanty eyes,” Osbourne also allegedly referred to former co-host and executive producer Sara Gilbert, who is a lesbian, as “p*ssy licker” and “fish eater,” according to more than one of Ali’s sources including Remini. In addition getting Remini on the record, Ali used a unnamed sources for his piece.

“This story is based on conversations with 11 sources who spoke to me in 2018 and again in recent days about remarks Osbourne has made over the years,” he writes.

Remini told Ali that in 2010, before the launch of the CBS panel show, Osbourne took Remini to lunch and tried to convince her to help Osbourne remove co-host Holly Robinson Peete. According to Remini, Osbourne told her that “Holly wasn’t a good person, not to trust her and that we should find ‘another Black person who is funny.’”

Osbourne reportedly based her opinion of Robinson Peete on the time she spent with her when they were both contestants on Celebrity Apprentice, hosted by Donald Trump.

By the end of the first season of The Talk, both Robinson Peete and Remini were fired, “at the direction, according to multiple sources, of Osbourne,” Ali reported.