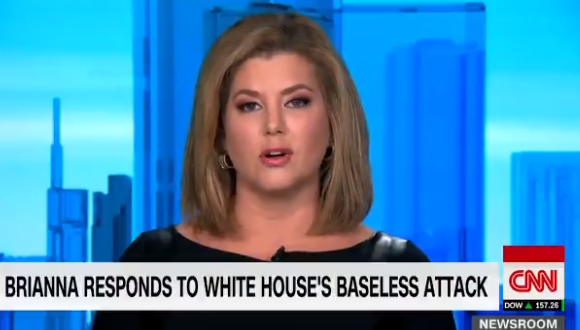 The Trump administration went head to head with CNN this week, with White House press secretary Kayleigh McEnany criticizing CNN anchor Brianna Keilar, seemingly connecting statements she had made on her broadcast to the shooting of two Louisville police officers.

Protests against the grand jury’s decision in the Breonna Taylor case turned violent Wednesday night in Louisville after a grand jury indicted only one cop, not for murder of Taylor, a 26 year-old EMT, but for shooting into a neighboring apartment — been viewed as injustice by many across the country. Towards the conclusion of her Thursday press briefing, McEnany brought up Keilar.

“You contrast his [President Trump] message with that of CNN’s Brianna Keilar, who said ‘I question the judgment of the Kentucky Attorney general saying that mob justice is not justice.’ We know that this is very loaded language. That’s an appalling statement from Brianna Keilar at CNN, and what is outrageous about this take is that mob justice is not justice. Hours later, after this comment was made on CNN, two police officers were shot.

McEnany went on to state a list of recent incidents of violence against cops. McEnany referred to those incidents as “outrageous.”

The press secretary added: “And the words of CNN and of Brianna Keilar are outrageous, irresponsible, and we should never hear statements like that followed by, hours later, two police officers being shot.”

Keilar wasn’t amused by having her name mentioned by McEnany in that context, and addressed the remarks on her Friday broadcast.

“Yesterday, White House press secretary implied that I am responsible for two police officers being shot in Louisville,” the anchor said of McEnany. “She is lying to Americans again and I’ll address that in a moment. But first, I’m not the Brianna that the White House should be focused on right now. Breonna Taylor is.”

Before diving into examples of McEnany’s lies, Keilar spoke about Taylor’s murder and why many are furious at the apparent lack of justice for her death.

In addition to Trump and McEnany, Keilar also brings up Fox News host Tucker Carlson in her 10-minute monologue, and accuses them of misconstruing her comments on purpose.

“At no time did I suggest that violence is justice, and I can’t believe I even have to explain that. But the alternative is letting someone like Kayleigh McEnany misquote and manipulate what you say. McEnany, who repeatedly lies to the American people,” added Keilar.

She concluded by listing a number of examples in which the White House press secretary said things that ended up being false. She also listed Trump’s false statements about the coronavirus, McEnany’s defenses of those statements over time, and condemned how the president recently celebrated MSNBC anchor Ali Velshi getting shot by a rubber bullet. At a recent campaign rally, Trump described Velshi getting hit as “a beautiful sight.”

“I’m not the Brianna that the White House should be focused on right now. Breonna Taylor is.”
@brikeilarCNN responds to Press Sec. Kayleigh McEnany’s remarks about her. pic.twitter.com/dR40GxR4u7