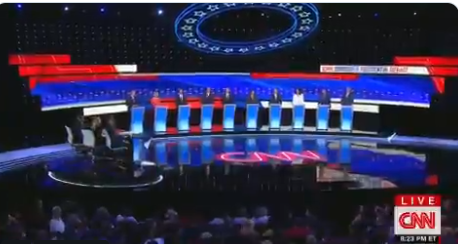 The 2019 Democratic presidential primary debates in late-July gave CNN a much-needed August ratings boost. The ratings performance from the prime time debates was so strong among adults 25-54, that the network was actually able to earn a rare monthly prime time ratings win over both MSNBC AND Fox News in the ad-friendly A25-54 prime time demo.

Not only did CNN win August in the prime time demo, but August 2019 ended up being CNN’s most-watched August ever prime time (1.47 million total viewers). The network averaged 1.05 million prime time viewers the previous August, which had been the most-watched on record.

While its performance in prime time was quite strong relative to its competitors, CNN actually fell short to Fox News in total day viewers and the total day demo.

With that in mind, in addition to touting the prime time demo win, CNN touted its more frequent wins over MSNBC in the demo.

On the programming front – The Situation Room with Wolf Blitzer beat MSNBC at both 5 and 6 p.m. among adults 25-54.  During the 5 p.m. hour, Sit Room averaged more demo viewers for the 15th straight month, and more demo viewers than MSNBC’s 6 p.m. hour for 21 of the past 24 months.

In the 8 p.m. hour, Anderson Cooper 360 topped All in With Chris Hayes in the demo, a bit of a surprise.

Additionally, Cuomo Prime Time with Chris Cuomo (9 p.m.) was CNN’s top-rated news program in both the demo and total viewers 1.113 million this month. Cuomo had a rather interesting end to the month as well.

CNN surpassed MSNBC during dayside (9am-4pm daypart, 134k vs. MSNBC’s 110k), now for the 66th straight month, the longest streak on record. CNN’s dayside programs also easily surpassed MSNBC in August, posting higher demo 25-54 audiences including: CNN Newsroom with Poppy Harlow and Jim Sciutto (10am), At This Hour with Kate Bolduan (11am), Inside Politics with John King (weekday, noon), CNN Right Now with Brianna Keilar (1pm) and CNN Newsroom with Brooke Baldwin (2 & 3pm). On weekday mornings, Early Start with Christine Romans and Dave Briggs (4-6am), topped MSNBC in the demo 25-54. New Day with Alisyn Camerota and John Berman (6-9am) averaged 457k in total viewers and 108k in the demo.
Other program highlights include:
• The Lead with Jake Tapper (4pm) ranked #2 in cable news at 4pm, outperforming MSNBC’s Deadline: White House among adults 25-54 (157k vs. 142k).
• The Situation Room with Wolf Blitzer beat MSNBC at both 5pm and 6pm in the key demo adults 25-54 in August. During the 5pm hour, Sit Room averaged 175k vs. MSNBC’s 137k, topping MSNBC for the 15th straight month and at 6pm, the Blitzer-led program outperformed MSNBC (183k vs. MSNBC’s 158k) for 21 out of the past 24 months.
• Erin Burnett Outfront (7pm) ranked #2 in cable news during its hour, easily topping MSNBC’s Hardball with Chris Matthews in the key demo (216k vs. 183k).
• Anderson Cooper 360 beat MSNBC this month, topping All in With Chris Hayes in the demo adults 25-54 (232k vs. 223k).
• Cuomo Prime Time with Chris Cuomo (9pm) was CNN’s top-rated news program in both the demo 25-54 (271k) and total viewers 1.113 million this month.
• CNN Tonight with Don Lemon averaged 259k in the demo and 971k in total viewers at 10pm in August.

On Sundays, Inside Politics with John King (8am), State of the Union with Jake Tapper (9am and noon), Reliable Sources with Brian Stelter (11am), Fareed Zakaria GPS (1pm) all ranked #2 in cable news in their respective time periods, ahead of MSNBC by double digits among adults 25-54. CNN also topped MSNBC for 23 out of 24 hours on Sundays in the demo. CNN Newsroom with Fredricka Whitfield (2-4pm) ranked #1 in cable news on Sunday in 25-54.

Cable News TV Reach: CNN continues to reach the largest cumulative TV audience (among both total viewers and adults 25-54) of any cable news network 2019-to-date making this the 18th consecutive year on record for the network.