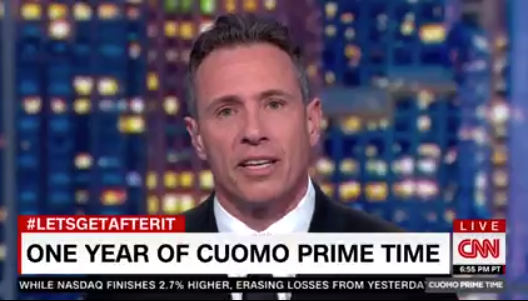 A nice, relaxing day with family out on Shelter Island quickly soured for Chris Cuomo when an unidentified person came up to the Cuomo Prime Time host and instigated a verbal altercation with him.

A clip of the exchange was posted online by a YouTube channel called “THAT’S THE POINT with Brandon.” The description noted that the video was sent in by a “fan of news.”

The altercation appeared to have occurred when the person baited Cuomo by calling him “Fredo,” a reference to the black sheep of the family in The Godfather.

“Punk ass bitches from the [political] right call me Fredo. My name is Chris Cuomo. I’m an anchor on CNN,” he can be heard saying. “Fredo is from the Godfather. It was that weak brother. It’s used as an Italian aspersion…”

Cuomo then compared the word to the n-word for Italians and asked, “Is that a cool fucking thing?” The person responded, “You’re a much more reasonable guy in person than you seem to be on television.” The person also claimed that he didn’t want any problems, and Cuomo responded, “You called me Fredo. It’s like I called you a punk bitch. You like that?”

Cuomo then warned the person that he was going to have a “fucking problem.” And when someone else shouted, “What are you going to do about it?” Cuomo responded, “I’ll fucking ruin your shit. I’ll fucking throw you down these stairs like a fucking punk.” Eventually, the altercation was broken up.

The ordeal appears to have taken place at Sunset Beach, one of the trendiest bars in the Hamptons and one frequented by celebrities and other high-rollers.

A CNN spokesperson is standing up for the network’s 9 p.m. star:

Chris Cuomo defended himself when he was verbally attacked with the use of an ethnic slur in an orchestrated setup. We completely support him.

Many right-wing Twitter influencers and pundits have slammed Cuomo for his behavior, but one of his timeslot competitors stood up for him. Sean Hannity, someone who undoubtedly has received more than his fair share of hate in public, said Cuomo “has zero to apologize for. He deserves the apology.”

I say good for @ChrisCuomo

He’s out with his 9 year old daughter, and his wife, and this guy is being a jackass in front of his family.

Imho Chris Cuomo has zero to apologize for. He deserves the apology. https://t.co/VnyMNgz14U

UPDATE: Cuomo addressed the matter via Twitter on Monday morning.