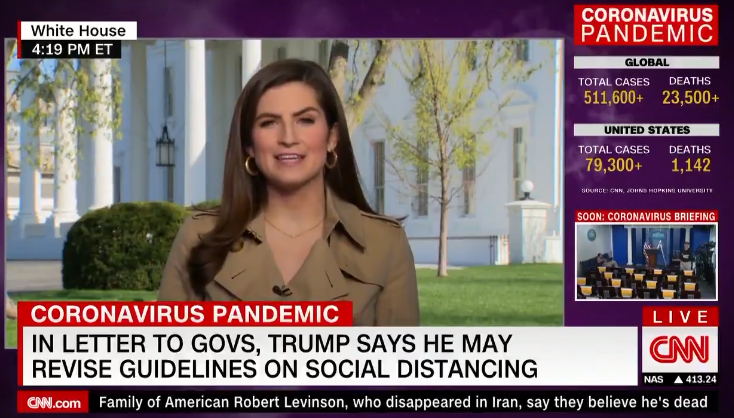 President Trump’s disdain for CNN came through again today. This time, it was Kaitlan Collins, and not Jim Acosta, who the president gave the cold shoulder to.

“Two questions for you, Mr. President,” she said at one point.

“I didn’t call you,” Trump said. “I called this gentleman.”

Trump pointed to a reporter seated in the row behind Collins.

“Who are you with?” Trump asked.

“I’m with Bloomberg,” said the reporter.

Collins tried to ask questions at other points during the briefing, but was ignored. Trump then turned the briefing over to vp Pence and left the briefing. As he walked out, Collins began asking her question, but he again ignored her and left.

Collins, like most CNN on-air talent, is not beloved by the administration. At last Friday’s briefing, she stood up for NBC White House correspondent Peter Alexander after Trump called him “a terrible reporter” to his face. She asked the president if it was appropriate to say those types of words to and about a journalist, given the country is going through a crisis.

In July 2018, Collins was barred from covering an open press event in the Rose Garden featuring Trump and Jean-Claude Juncker, the president of the European Commission. According to the White House, at an Oval Office photo op with the two leaders earlier in the day, Collins asked questions that were “inappropriate.”