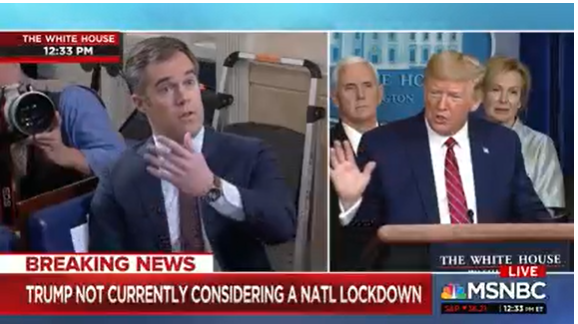 UPDATE: At 2 p.m. ET, Alexander addressed the situation on Twitter:

I offered both Pres Trump and VP Pence an opportunity to reassure Americans.

Simple question: “What do you say to Americans who are scared?”

Trump, to me: “I say, you’re a terrible reporter.”

Pence, an hour later: “Don’t be afraid. Be vigilant.”

President Trump attacked a respected member of the news media after being queried this afternoon during a daily press conference concerning the coronavirus.

NBC White House correspondent and Saturday Today co-host Peter Alexander asked the president about whether he might be offering false hope by touting the potential of a drug designed to treat COVID-19, and what he has to say to Americans who might be frightened.

Trump’s response: “I say that you’re a terrible reporter, that’s what I say … that’s a very nasty question.” The president continued by slamming NBC parent company Comcast, referring to it as “Concast.”

NBC’s @PeterAlexander asks Trump what he’d say to Americans who are frightened.

Trump goes on rant against Alexander, says he asked a “nasty question,” calls him a “terrible reporter” and attacks NBC and Comcast. pic.twitter.com/vZAk3M4mqR

The president made the remarks about Alexander and NBC not long after it was made public that longtime NBC News staffer Larry Edgeworth had died after contracting COVID-19.

Alexander asked vice president Mike Pence the same question an hour later, and received an actual answer: “I would say do not be afraid, be vigilant.”

This is not the first time Trump has attacked Alexander. In March 2016, he sarcastically told Alexander: “You’re so beautiful” after the reporter asked about the language Trump uses, and how to talk to children about it.

Oh, you’re so politically correct. You’re so beautiful. Oh, look at you. Awwww. Aw, he’s so. Oh, I know. You’ve never heard a little bad, a little off language. I know, you’re so perfect. Aren’t you perfect. Aren’t you just a perfect young man. Give me a break. You know what? It’s stuff like that that people in this country are tired of. It’s stuff like that.

Alexander’s colleagues in the press supported him, both during the conference and now via Twitter:

—@kaitlancollins asks Trump if attacking @PeterAlexander and NBC is appropriate given the country is going through a crisis.

Trump continues to go off on Alexander, saying he’s “not a good journalist,” among other things. pic.twitter.com/SdA6zwS4r8

My colleague @PeterAlexander asked a fair question to @POTUS about his message to Americans who are afraid. @POTUS chose to instead go into attack mode. Many Americans would probably like to hear that message.

Stellar work from @CeciliaVega and @kaitlancollins for doing something that should be routine: Following up with questions. If President Trump is going to insist on briefing daily, he should be prepared to answer legitimate questions from @PeterAlexander and others.

That question was a lay up..a high hanging curve for 45 to calm a scared, stressed out nation. He decided to insult the reporter asking it. @PeterAlexander is a great reporter. @NBCNews https://t.co/saIjf6sChc

Donald Trump’s response to Peter Alexander’s question was pathetic. He attacked a reporter for asking the president to address the fears of Americans. He responded like an angry autocrat.

The president answers a reporter’s question about his message to scared Americans by attacking the reporter, @PeterAlexander

Seems to say more about the president than about the reporter

We should ALL be focused on the citizens struggling with this disease, NOT attacking

For the record, @PeterAlexander asked a relevant and important question.

Talk about esprit de corps. Excellent question @PeterAlexander – should have been a layup for the president to make Americans feel better. Good for @CeciliaVega for keeping it going AND not letting POTUS off the hook – & @kaitlancollins for calling him out.

“What do you say to millions of Americans who are scared?” – Peter Alexander

“I say that you are a terrible reporter.” – Trump

Good on other reporters for jumping in to defend @PeterAlexander and follow up on his perfectly reasonable question. This is not a president. This man is in WAY over his head.

.@PeterAlexander is a phenomenal journalist and person.

Trump just smeared him w/o offering a single example to back up this attack.

👉The attack was prompted by Peter asking the president to calm an anxious nation.

And Peter Alexander just asks essentially the same question to Mike Pence that led to Trump wildly attacking him about Americans being scared. Pence gives a normal, calming answer directly to the American people.

.@PeterAlexander asks Pence the same question and he the Vice President answers it by talking directly to the American public about what folks need to be scared of and what they do not.

FWIW, @PeterAlexander is one of the most hard-working, honest, and professional journalists on the White House beat today. He’s fair, unflappable, and asks top-notch questions.

If that’s “terrible,” we should all aspire to be just as terrible in our own careers.

And thank you, @CeciliaVega, for following up on his legitimate question to Trump.

A fair question by @PeterAlexander that I personally would have asked and have during any time of crisis to any leader at the wheel. Local, state or federal. Wow. pic.twitter.com/CllWvmTzgn