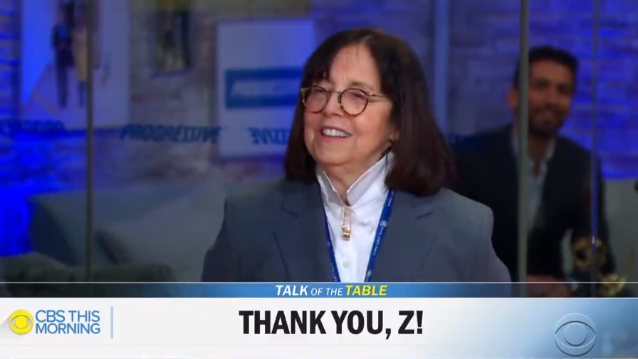 Zirinsky, who has spent 49 years as a CBS Newser, is leaving her role as news division president after two-plus years on the job for another role at ViacomCBS.

“You helped restore the morale of this place,” CTM co-anchor Anthony Mason said to Zirinsky. “And we are grateful for it.”

Zirinsky added: “CBS News will always be in my heart. I am not leaving and you all have worked so hard and the show has worked so hard 24/7, and I couldn’t be more proud to be a part of this family.”

Gayle King admitted, on air, that Zirinsky is the reason she is still at CBS News, later adding, “I’m glad you’re going to be around because I still need you.”

Khemlani will be New York-based, and McMahon will be bicoastal. Both start Monday.

“And we are looking forward to the next chapter with Neeraj Khemlani and Wendy McMahon, who are taking over,” said Mason.

THANK YOU Z: @CBSNews President and Senior Executive Producer @SZirinsky is moving on to a new role at @ViacomCBS.

“Z,” as she’s known by everyone, is a legend at CBS News and a giant of broadcast journalism. pic.twitter.com/xxbxMG2RXB