NEXT:How Stephanie Ruhle Went From Finance to TV News
PREVIOUS:Will Savannah and Hoda Do the Luge Together in Pyeongchang? 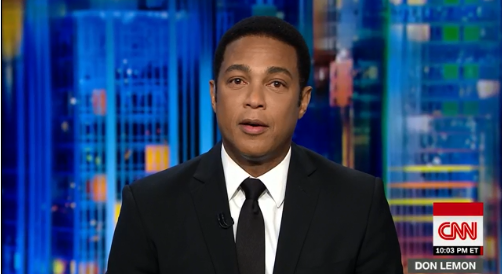 It has been an extremely difficult time for CNN Tonight anchor Don Lemon, and his family.

The veteran TV newser took some time off from hosting the program after his older sister, L’Tanya “Leisa” Lemon Grimes passed away last Wednesday in Louisiana in an accidental drowning.

But Lemon returned to CNN Tonight on Tuesday, and began his 10 p.m. hour by thanking a significant number of TV newsers who reached out to him to express their condolences for his loss.

He thanked everyone from Sean Hannity, to Joy Reid, to Megyn Kelly, Anderson Cooper, and many more.

“There’s so much conflict right now, and I think it’s important for all Americans to know that something like this when it happens, it tends to bring out the best in people,” Lemon noted. “Even some of my competitors and people I have raging arguments with on television.

You think we hate each other, but we don’t,” he continued.

Lemon became quite emotional towards the end of his 3 minute, 24 second monologue, particularly when speaking about the support he has received from CNN Worldwide chief Jeff Zucker.

“Jeff Zucker, I will never forget that you wouldn’t leave my office,” Lemon began, before starting to choke up.

After a brief pause, he continued. “You wouldn’t go home until I got in a car, then on a plane. So I want to thank you and Karen.”

.@DonLemon returns to CNN after the tragic loss of his sister: “This is exactly where she would have wanted me to be” https://t.co/S4OEufJJ20 https://t.co/Tc0hfgCqF7