NEXT:Omarosa Cuts Today Show Interview Short, Says She Has to Go Do Another Interview
PREVIOUS:Bill Shine Is Bringing a Producer's Sensibility to the White House 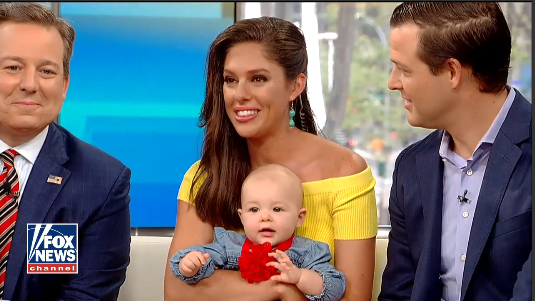 With her F&F Weekend co-hosts, her husband and baby girl alongside her, the program showed a six-minute montage of Huntsman’s most notable moments on and off the curvy couch.

Fox News released a statement of its own on Sunday: “We thank Abby for her contributions to FOX News and wish her the very best.”

Huntsman joined FNC general assignment reporter in 2015 and was named Fox & Friends Weekend co-host in December 2016. Prior to joining FNC, Huntsman served as co-host of MSNBC’s The Cycle and was a host/producer for The Huffington Post’s streaming network HuffPost Live.

She will reportedly join ABC’s The View, and assuming reports are correct (nothing has been confirmed by the network), she will join fellow former Fox Newser Meghan McCain as a second conservative voice on ABC’s daytime talk program.

Huntsman’s arrival on The View comes on the heels of two panelist departures. Sara Haines is departing the program to join Michael Strahan as co-host of GMA’s new third hour, and Paula Faris is taking on new roles at ABC News.