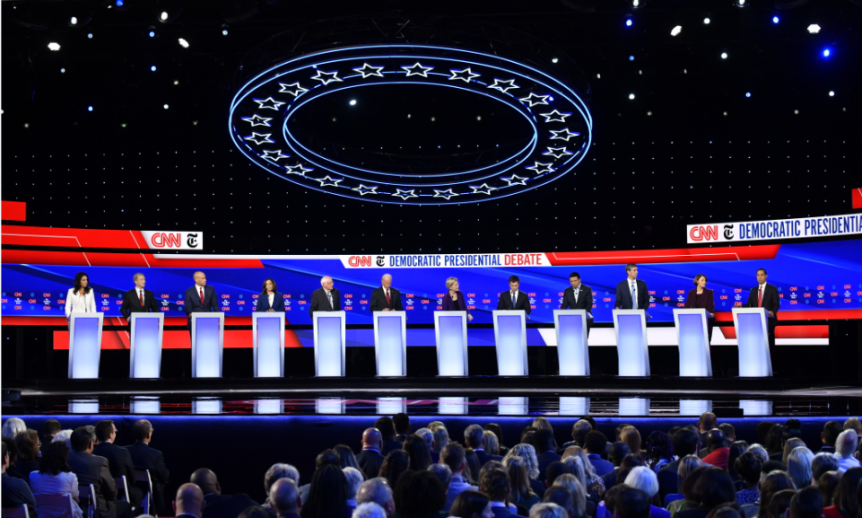 There’s some good news and bad news for CNN on the 2019 ratings front.

The good news for the network is that it continues to attract more adults 25-54 than rival MSNBC in total day, daytime and weekend hours. The network will also close out 2019 ranking No. 7 in all of basic cable in total day among average total viewers, marking the 3rd consecutive year that CNN is one of basic cable’s 10-most-watched network across the 6 a.m. – 6 a.m. ET daypart.

The bad news is that it can’t seem to catch up to its Fox News and MSNBC rivals during the all-important prime time daypart, and posted year-over-year audience losses in multiple categories across multiple dayparts.

Versus 2018, CNN was -2% in total prime time audience. That’s not terrible, considering 2018 was a midterm election year. But the losses are more significant in other dayparts. Despite snagging a top 10 ranking in total day, CNN was -8% in total day audience from last year.

Yes, one can partially attribute the year-over-year losses among younger demos to 2018 having been an midterm year, a time when more casual news consumers (let’s face it, I’m talking younger ones) are more likely to pay attention to TV news than they are on off-election years.

While cable newsers should expect to see Nielsen linear ratings gains among total viewers in 2020, that’s still not necessarily true among younger demos. Americans under 55 are increasingly leaving traditional broadcast and cable television. While cable news does skew older than entertainment programming, it isn’t totally immune to the cord-cutting trend. It will be interesting to see what happens here.

Below are the final 2019 Nielsen live+same-day numbers:

On the programming front – a number of CNN’s signature programs took 3rd place in their respective timeslots. This was true for each of the network’s prime time shows: Anderson Cooper 360, Cuomo Prime Time, and CNN Tonight with Don Lemon.

However, there were some wins over MSNBC weekdays (but none over to Fox News really to speak of). The 5 p.m. hour of Situation Room with Wolf Blitzer beat MSNBC in the A25-54 demo. The same was true for the program’s 6 p.m. hour. At 7 p.m., Erin Burnett Outfront beat its MSNBC competition in the key A25-54 demo for 6th straight year.

CNN touted its weekend morning programming, and understandably so. Two standouts for the networks on weekends were CNN Newsroom with Fredricka Whitfield, which finished No. 2 from 1 11 a.m. – 3 p.m. among adults 25-54, and CNN Newsroom with Ana Cabrera. In fact, Cabrera delivered more adults 25-54 in the 3 p.m. hour than MSNBC or Fox News. She finished No. 2 at 4 and 5 p.m.

Lastly, the debates – CNN hosted two Democratic candidates’ Presidential primary debates (over 3 nights) in 2019. One of the 2 debates went head-to-head with MSNBC: CNN’s/New York Times debate from Westerville, Ohio attracted 8.3 million viewers, while MSNBC’s/Washington Post debate from Atlanta averaged 6.5 million. These were the 2-lowest-rated debates of the cycle at the time.

It will be interesting to see which programs bounce back for CNN in 2020. We’re banking on CNN prime time, thanks, in part, to all of the 2020 presidential election-related events that will be taking place in and around the daypart.

Below is a CNN press release concerning its Nielsen ratings performance in 2019. This is the most up-to-date release, sent Dec. 17:

BESTS MSNBC ON WEEKENDS AND SUNDAY MORNINGS IN DEMO 25-54

CNN had a very successful 2019 and will end the year beating MSNBC in total day, dayside, weekends and on Sunday mornings in the key demographic adults 25-54. CNN is also on track to have its third-best weekday prime time (M-F 8-11pm) in 11 years (since 2008) among total viewers (1.150 million), just following the presidential election year of 2016 and inauguration year 2017. CNN Original Series and CNN Films are having banner ratings as well, ranking #1 or #2 in their time periods in either total viewers and/or adults 25-54 this year.  CNN had the youngest audience in cable news in total day and prime time and reached the largest cumulative TV audience for a record-setting 18 years. The network will close out 2019 ranking #7 in ALL of cable in total day among total viewers, marking the third consecutive year that CNN is a Top 10 cable news network. In weekday prime time, CNN will rank #9 in all of cable among total viewers, also in the Top 10 for the second consecutive year.

In total day (6am-6am), CNN beat MSNBC for the sixth straight year (165k vs. 155k) in the key demographic adults 25-54.  In dayside (9am-4pm), CNN outperformed MSNBC for the 23rd straight year in the demo 25-54 (168k vs. MSNBC’s 137k).  Every CNN hour also surpassed MSNBC this month, posting higher 25-54 demo audiences including: CNN Newsroom with Poppy Harlow and Jim Sciutto (9am and 10am), At This Hour with Kate Bolduan (11am), Inside Politics with John King (weekday noon), CNN Right Now with Brianna Keilar (1pm) and CNN Newsroom with Brooke Baldwin (2pm and 3pm).

On Saturdays, New Day with Victor Blackwell and Christi Paul (6-9am, CNN Newsroom 10am) and Smerconish (9am) outperformed MSNBC this year, ranking #2 in cable news in both total viewers and in the demo 25-54.  CNN Newsroom with Fredricka Whitfield ranked #2 in cable news on Saturdays (11am-3pm), and CNN Newsroom with Ana Cabrera ranked #1 at 3pm (#2 in the 4pm and 5pm hours) among adults 25-54.  SE Cupp Unfiltered (6pm) ranked #2, surpassing MSNBC in the demo 25-54 by double digits (+64%).  The Van Jones Show ranked #1 in the demo for 2019 YTD and The Axe Files with David Axelrod (both alternating in the 7pm time period) ranked #2.

All CNN Sunday morning programs including Inside Politics with John King (8am), State of the Union with Jake Tapper (9am and noon), Fareed Zakaria: GPS (10am and 1pm), and Reliable Sources with Brian Stelter (11am) ranked #2 in cable news this year, easily surpassing MSNBC in their respective time periods among adults 25-54.  Inside Politics and SOTU (9am and noon) topped MSNBC in total viewers as well.  New Day Sunday (7am) ranked #2 in cable news in the key demo. CNN Newsroom with Fredricka Whitfield at 3pm on Sundays ranked #1 among the key demo and ranked #2 in the 2pm and 4pm hours, as did CNN Newsroom with Ana Cabrera on Sunday afternoons/evenings.

CNN Original Series ranked #1 and/or #2 in either total viewers/adults 25-54 demo rating in 2019, averaging record highs and attracting younger cable news audiences.  So far in 2019, CNN claimed four of the Top 10 non-fiction Historical series in ALL of cable among adults 25-54, more than any other non-fiction network including the History Channel.

Out of Home Lift