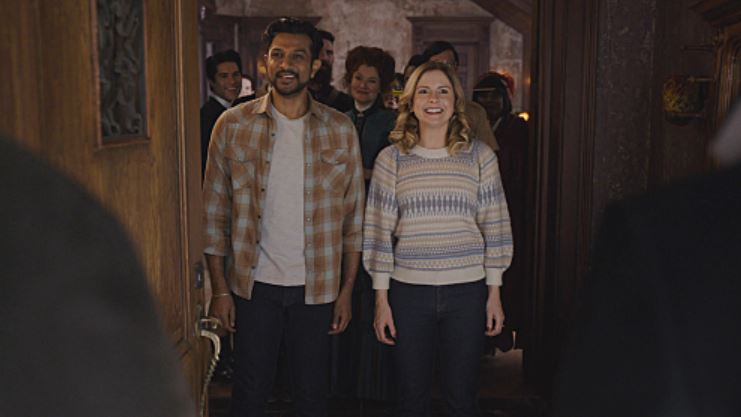 Paramount Global and its streaming service Paramount+ have partnered with Lionsgate for the exclusive U.S. subscription VOD rights to CBS’ hit comedy Ghosts.

The streaming deal with Lionsgate confirms the show’s breakout success, coming after it was renewed for a second season on CBS after becoming the year’s highest-rated new comedy.

In addition to Paramount+’s existing in-season rights to Ghosts, the new deal will make the service the official year-round SVOD home for all episodes of the show beginning in Fall 2022.

Ghosts, based on the British series of the same name, is the most-watched new broadcast half-hour comedy in four years, as well as the year-to-date No. 1 comedy on Paramount+.

In Ghosts, Samantha (Rose McIver) and Jay (Utkarsh Ambudkar) are a couple who discover that their new dream house is haunted by ghosts that only she can see and hear. Also starring are Brandon Scott Jones, Richie Moriarty, Asher Grodman, Rebecca Wisocky, Sheila Carrasco, Danielle Pinnock, Roman Zaragoza and Devan Chandler Long.

“Ghosts is one of the biggest comedy hits in years and one of the most talked about shows. It is the perfect addition to the fantastic pipeline of content driving peak streaming at Paramount+,” said Tanya Giles, chief programming officer at Paramount+, in a statement.

“With fresh story lines, an incredible cast and a brilliant creative team, Ghosts is that rare television series that taps into the popular zeitgeist to become a cultural phenomenon,” said Jim Packer, president of the Lionsgate Worldwide Television Distribution Group, who negotiated the deal with Barbara Zaneri, chief program acquisitions officer for Paramount Global.

“Kevin Beggs, Sandra Stern, Scott Herbst and their teams have formed an amazing collaboration with Valerie Bruce and Angie Stephenson from BBC Studios, along with Rachel Bendavid, who leads our co-production partnership, and the CBS Studios team to adapt their hit British format into a blockbuster success in the U.S.,” said Packer. “And we built on our longstanding relationship with Paramount Global to orchestrate a complex, multi-faceted agreement that brings Ghosts to Paramount+ for years to come.”

“Since the series premiere, Ghosts has found passionate viewers – both on CBS and Paramount+,” said David Stapf, president of CBS Studios. “Ratings and online conversation about the show have grown virtually every week, and the series is the #1 new comedy by a huge margin. The best part is that viewers are still finding this unique and brilliant series, and this new SVOD agreement will help further that discovery process in a big way.”