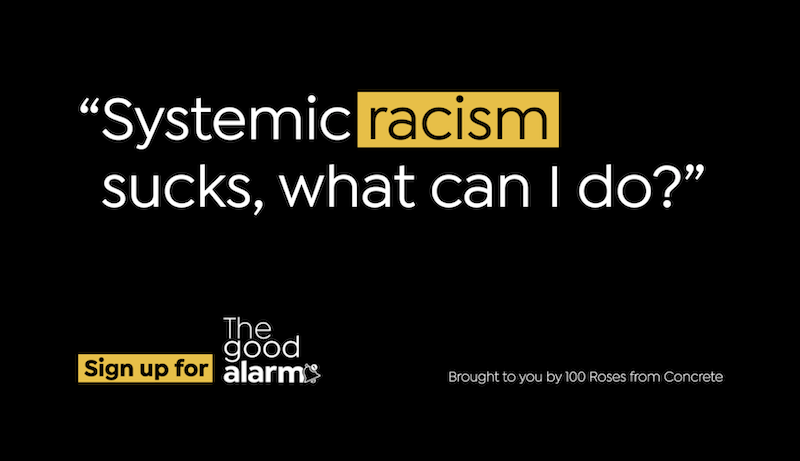 It can be hard to remember things. Even important things. Trust us, we get that.

When it comes to combatting systemic racism, there’s now a handy reminder.

A West Coast contingent of the 100 Roses From Concrete collective called West Coast Roses developed a system to remind people to take action on racial justice issues through an alarm system spurring its users to action. By signing up for The Good Alarm, which debuted earlier this week, people can receive scheduled prompts to donate, sign petitions and educate themselves on antiracism. The calendar includes several items per week, some of which are timed around certain dates.

The group chose Sept. 2 as a release date because it is three months after #BlackOutTuesday.

“The Good Alarm was born out of the gnawing need to do something. When the Black Lives Matter posts and press coverage began to dwindle, we realized we needed a way to keep the conversations going,” copywriter and West Coast Roses lead Dotun Bello explained.

“[West Coast Roses strategist Brandon Solis] had this idea to use the Google calendar as a way to remind himself to check his privilege daily,” he added. “We saw the opportunity to push this to friends and allies around us, at work and on social media. We started talking late in July, kicked out a plan and settled on September 2nd, three months after #BlackoutTuesday as a significant date to launch.”

For the first week, The Good Alarm calendar included signing up for Black Lives Matter this Wednesday and watching the documentary I Am Not Your Negro, available to stream on Netflix or YouTube, this Saturday. Next week’s items include donating to Colin Kaepernick‘s Know Your Rights camp, contacting government representatives to demand accountability through Resist Bot and learning about the racist origins of the Electoral College. The calendar has prompts planned for the coming months and the group plans to add more in the weeks ahead.

“There are a lot of resources out there right now and this makes sense because systemic racism is a huge machine. We decided to try and theme the weeks where we could, so people could really spend time with the issues raised,” Bello explained. “We gathered as many of these resources as we could in whatever form and divided them into three main categories: learning, donations and other actions.”

The Good Alarm also plans to grow its presence on social media and expand the list of sources it includes on its website in the coming weeks.

“We’re already thinking of little ways to bring the content to social through simple posts and are always looking for contributions to our source list,” Bello said. “Progress doesn’t stop, especially when you realize the systems in place right now aren’t going to be striped away in one day. We need to keep talking to people and maybe some of them will even see things from our perspective.”

Bello said the group has been motivated by the positive response it has received thus far.

“People seem eager to sign up and this is the motivation we need to continue to push this project forward,” he said. “I got a message from the founder of an agency I really admire yesterday. Hearing that The Good Alarm was shared across their agency means everything—that’s at least 150 people willing to help bring change. Humbling to be honest.”