-The Innocence Project, an organization that works to exonerate the wrongly convicted through DNA testing and reform the criminal justice system to prevent future injustice, has released its first PSA, “Happiest Moments,” narrated by actress Dascha Polanco, of Netflix’s Orange Is the New Black. It features photos and footage of Innocence Project clients and their families and shows both the pain and familial impact of wrongful incarceration, and the joy of release.

The Innocence Project collaborated with video agency Hayden5 and director Ariel Ellis on the project.

-As agencies continue to focus on their internal DEI initiatives, four organizations are releasing projects that are influenced and inspired by their ongoing missions to amplify positive messaging centered around people of color.

-In March, Procter & Gamble released its “Widen the Screen” campaign, and P&G’s chief marketer Marc Pritchard talked with Adweek about the business benefits of running such campaigns.

-According to a new Adweek-Morning Consult survey, 52% of Americans want to keep the new to-go cocktail and alcohol delivery rules—loosened in many states to support businesses during the pandemic—in place.

-A new travel spokesbot might having you wanting to bolt your door, hide under your bed and stay there forever after watching the freaky android’s vacation sales pitch.

-As Wimbledon takes to the court after a year off, Adweek looked at the best ad campaigns for this year’s tournament.

-The Advertising Research Foundation (ARF) has teamed with several industry research and media suppliers to conduct research on digital device usage and account sharing, which it will eventually launch as a syndicated measurement service, according to MediaPost.

-Outdoor media company Outfront Media has partnered with The Farmlink Project, an organization with a mission to eliminate food insecurity by connecting unused produce from farms to food banks across the country.

The campaign to highlight food insecurity uses statements like “One Third of All Food is Wasted,” “Put Us Out of Business,” and “The Solution is Right in Front of You” to get the point across.  Outfront Studios and Farmlink’s creative team produced the campaign, which is running in Los Angeles, Houston, Dallas, and New York. 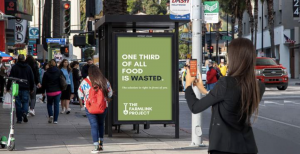