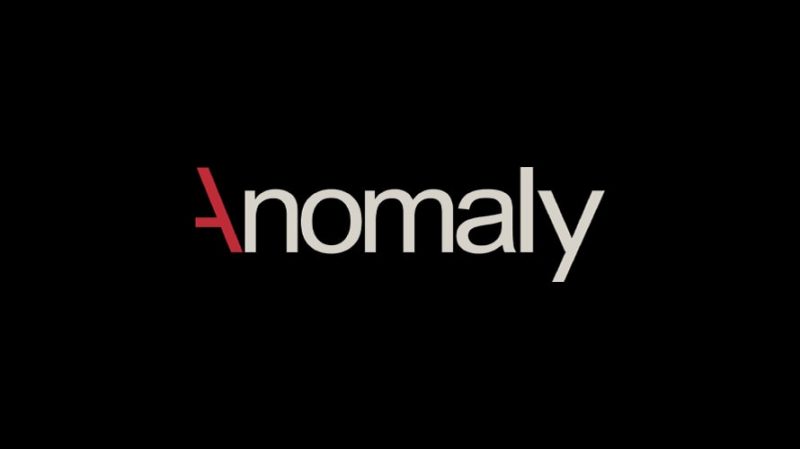 Most freelance assignments at agencies end with little fanfare, but Molly Dunn’s early departure from Anomaly New York has been far from ordinary.

When her three-month stint as a freelance group strategy director with the MDC Partners agency came to an abrupt end three weeks early, she took to LinkedIn on June 10 to say that the agency ended her freelance contract days after she raised complaints about inappropriate meeting space names.

“Almost two years after the #metoomovement began, Anomaly NY has meeting spaces named ‘The Champagne Room’ and ‘The Taint Table’.  This is the result of a lack of female leadership in the NY office,” Dunn wrote in the post. “I complained on Tuesday, and as of Friday I no longer work there. Do better boys.”

Since being published a little over a month ago, the post has received more than 400 reactions and more than 50 comments.

Anomaly global CEO Karina Wilsher says Dunn’s exit had nothing to do with the freelancer’s complaints and that the two meeting areas at issue — “The Taint Table” and “The Champagne Room” — were not official names for office meeting areas. But after Dunn went public with her allegation, agency executives did move to address the names through an agency-wide memo that sternly warned staffers against using “stupid, offensive slang for meeting areas” and, more generally, “inappropriate language or behavior.”

Dunn first raised concerns about the names after being invited to a meeting at “The Taint Table” (taint being a slang term for the perineum, the area between the genitals and the anus). The name was reportedly given to the table because it was between two wings of the office.

Dunn first received an invitation to a meeting at the “Taint Table” on May 16. The next day, Dunn sent an email to Anomaly head of recruiting Jenny Hudak asking: “Can’t possibly be the name of a conference room? How can I help get this changed?”

Hudak responded that it was not the name of a conference room but rather “slang for the hallway btwn (sic) the north & southside” and “an old term that we don’t use too much but … might slip in there sometimes.” 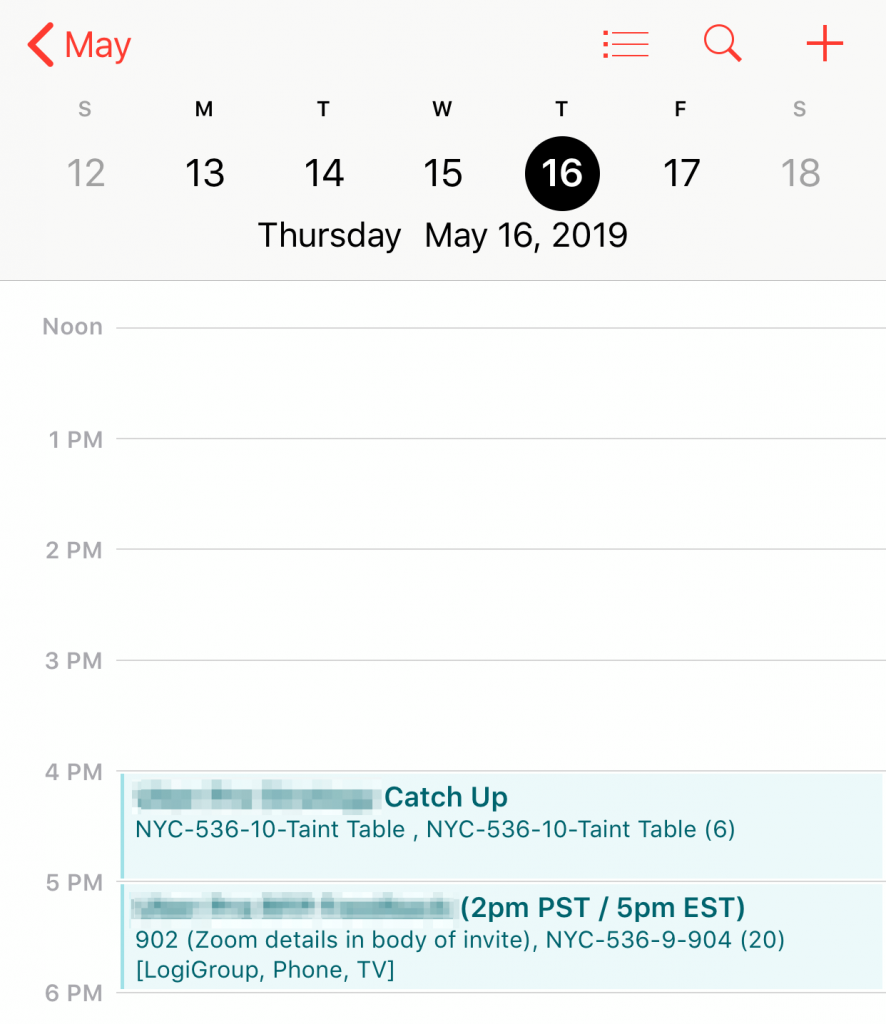 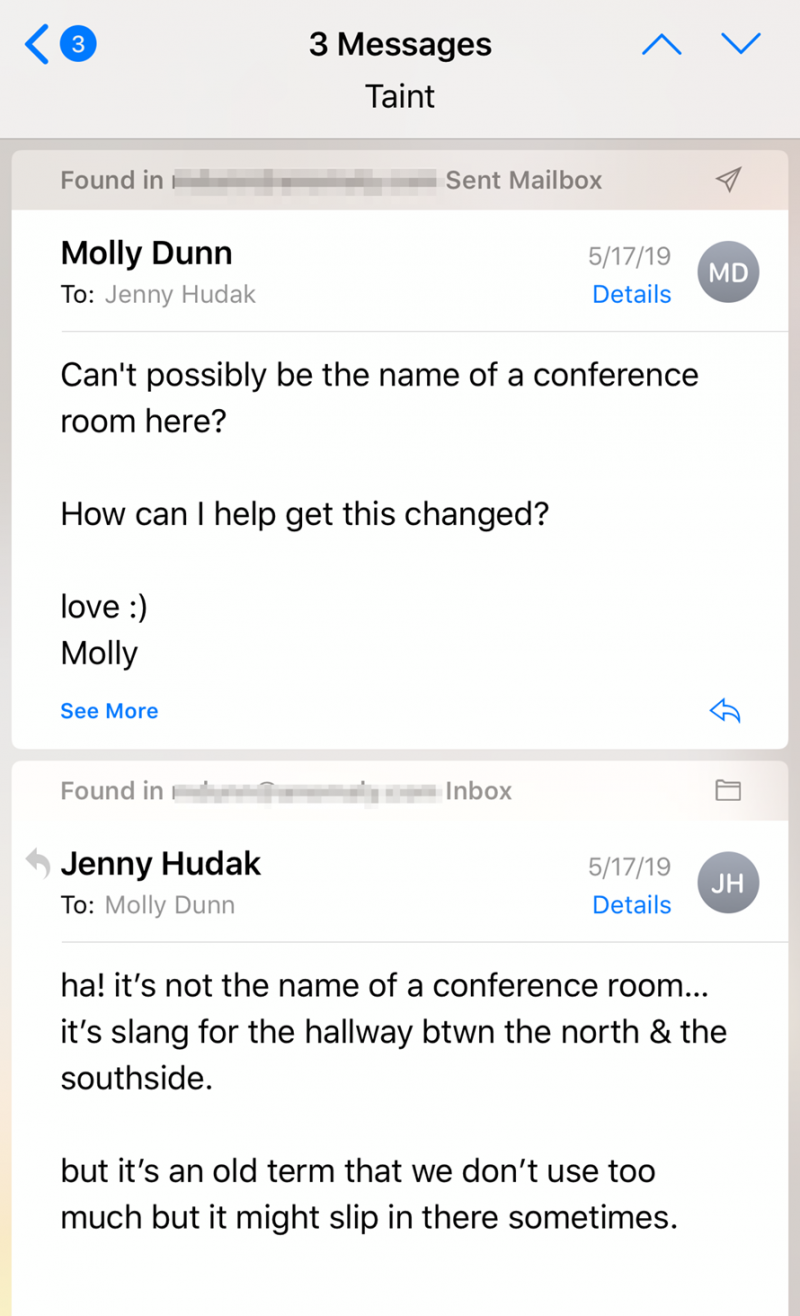 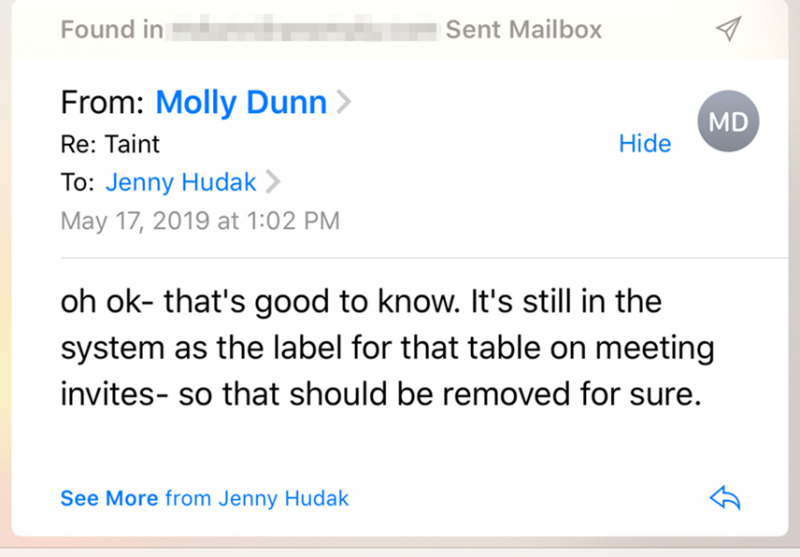 “The ‘Taint Table’ had no other connotation than the vulgar one at the agency,” Dunn tells AgencySpy. “The agency explanation solidified the vulgarity of the name. No one ever tried to provide a different definition.”

On June 4, Dunn received another calendar invite to a meeting at the “Taint Table” and again pointed out that it showed up on calendar invites, calling it “particularly offensive along with The Champagne Room” and asking what she could do to get it changed. 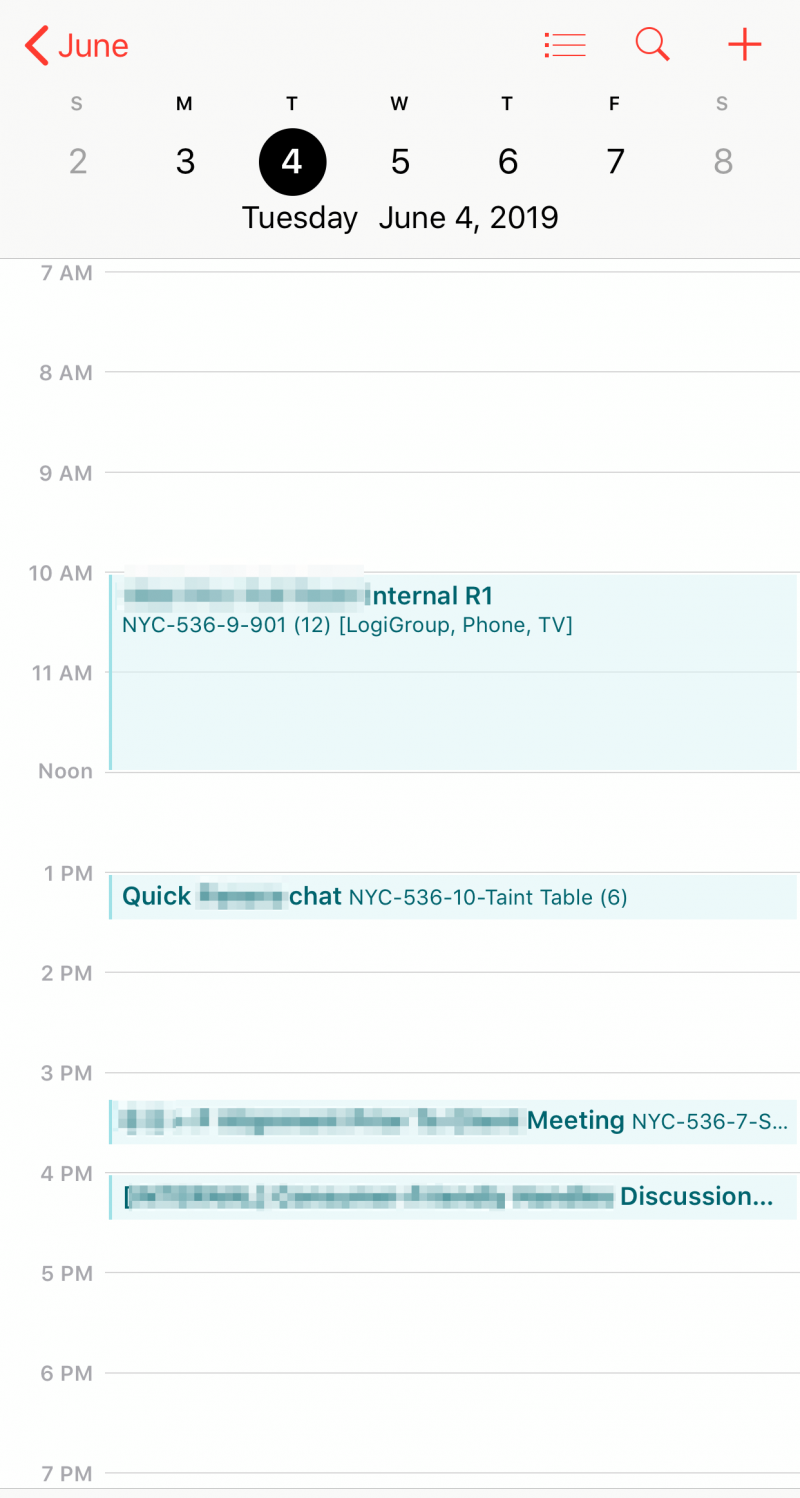 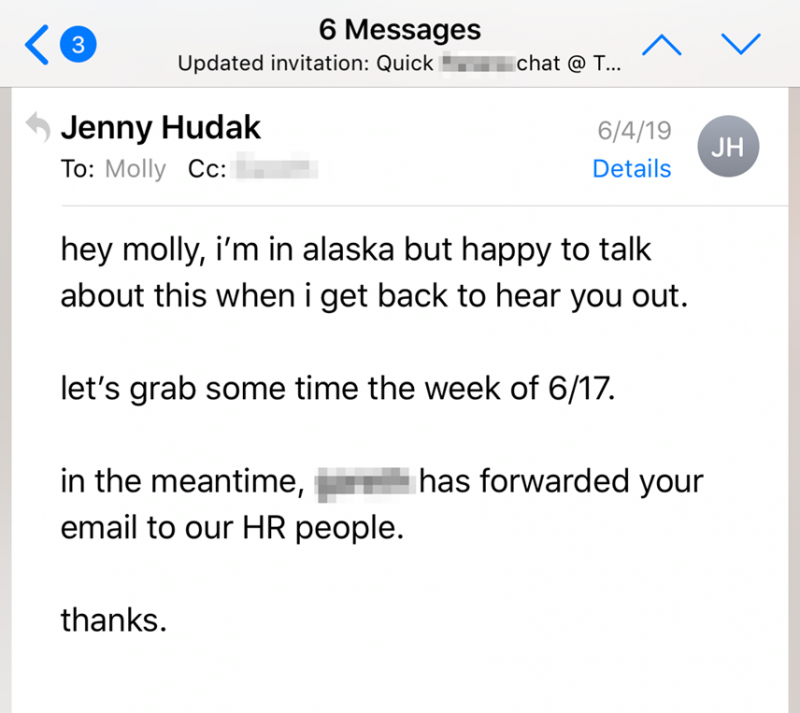 When she was informed by Hudak that her complaint had been passed on to HR and that the agency was planning at “looking at meeting rooms (including names)” as part of a broader restructuring the following month, she asked for an explanation as to why the issue couldn’t be addressed immediately and claims she didn’t receive a reply. 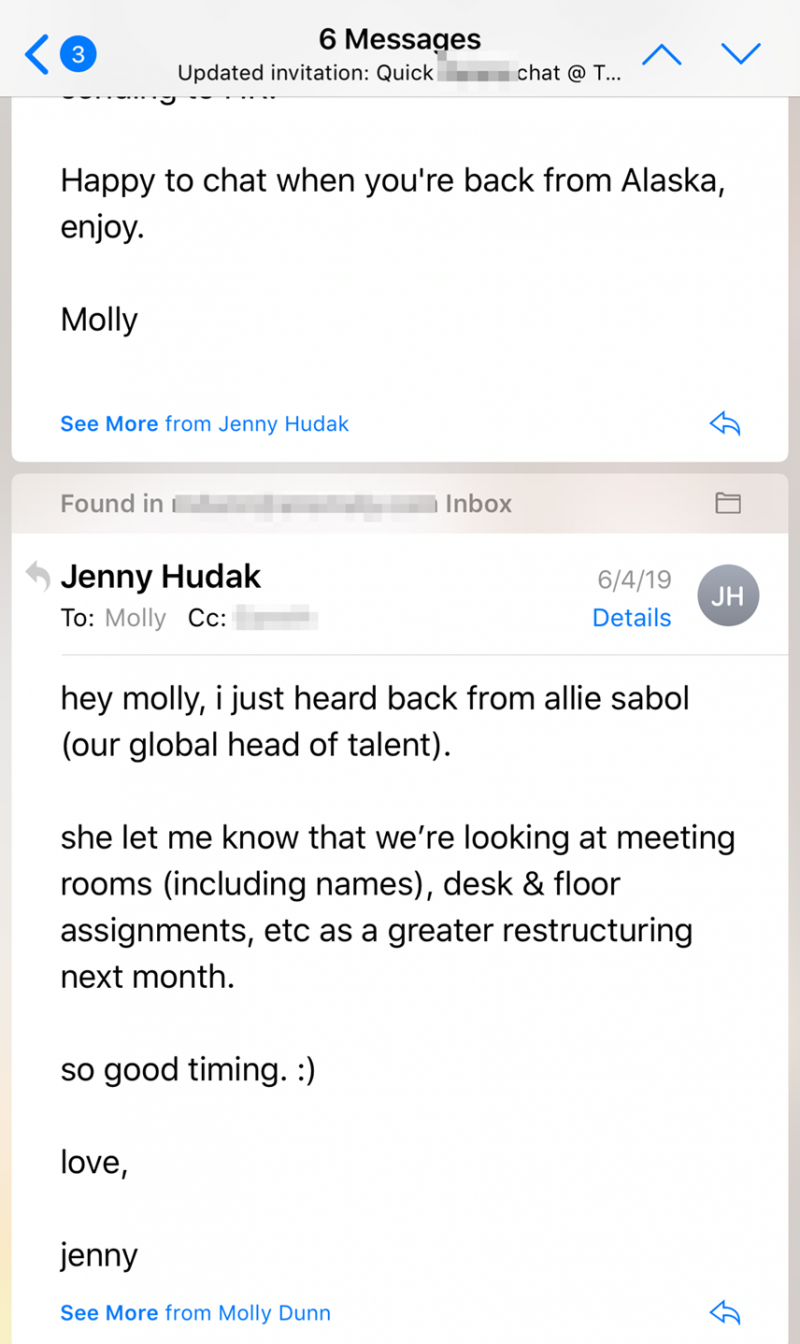 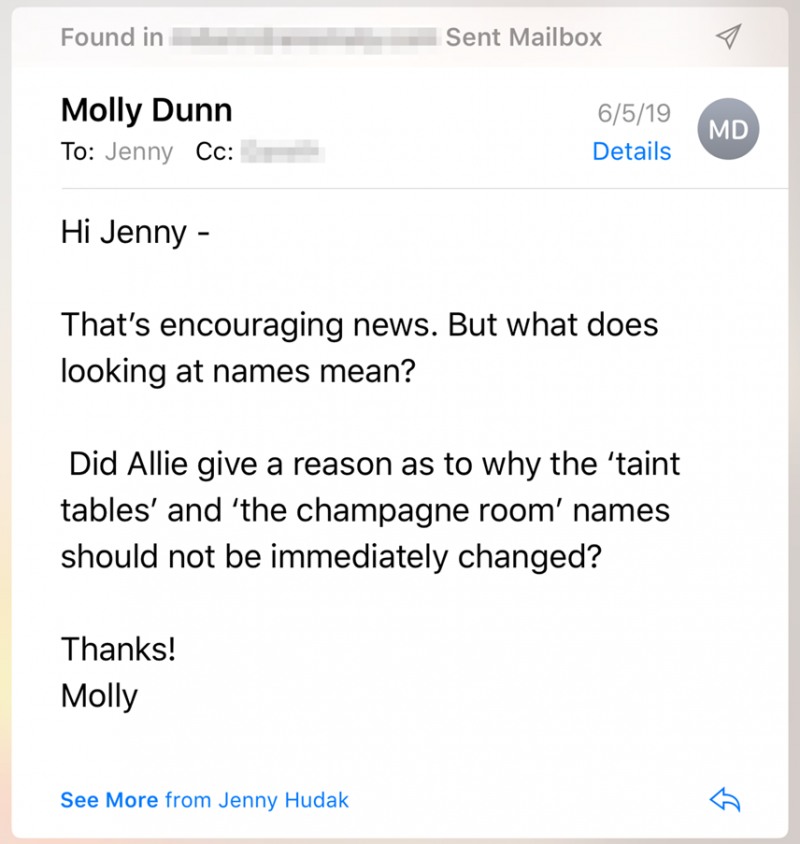 Wilsher says she was not aware of the names, or Dunn’s complaints about them, until Dunn posted on LinkedIn.

“Neither ‘The Taint Table’ or ‘The Champagne Room’ has ever been the name of a meeting room at Anomaly,” CEO Wilsher tells AgencySpy.

Wilsher said “Taint Table” was likely added manually to event invites by an employee and was not an official meeting space name sanctioned by the agency. As for “The Champagne Room,” she says it was a nickname created for the office of an employee who was unaware of its strip club connotation.

“‘The Champagne Room’ was the office of an employee who named it that simply because he loves champagne,” Wilsher says. “He, nor any leadership at Anomaly, knew of any unofficial slang definition.”

Wilsher says the employee changed the name of his office after learning about its other meaning. “He was very upset and obviously would not have wanted to cause any offense to anyone,” she adds, noting that the employee is an active member of Anomaly’s LGBTQ community and a proponent of workplace equality.

Wilsher says that as soon as she was made aware of the situation on June 12, she called a meeting including the agency’s New York leadership, human resources leaders, and Anomaly founding partner and executive chairman Carl Johnson to ensure the issue was addressed. In addition to renaming “The Champagne Room,” staff in the New York office were instructed to stop using any offensive nicknames for meeting spaces.

Johnson followed the meeting by sending an agency-wide email addressing the issue and recirculating an email he sent in November 2017 reinforcing Anomaly’s stated values and code of conduct.

“Following closely on the heels of Anomaly Week where we once again stated and reinforced our commitment to a range of principles and values—I need to send [the code of conduct] again,” he wrote. “I want you to read it again. I want you to act upon it…because not everybody is. Those people will not work here.

“So think hard, be respectful, be considerate….no stupid, offensive slang for meeting areas, no inappropriate language or behavior, nothing that undermines the values that we hold in such regard. We have created something very special here, so let’s all work very hard to nurture it.”

As for the three-week-early termination of Dunn’s freelance contract, she was told at the time that she was being let go because the agency no longer needed her work. Her freelance contract allowed either party to terminate the contract ahead of the initial end date with one week’s notice and Dunn says the agency informed her she would be paid for the following week when they informed her of their decision.

When asked by AgencySpy about the reason Dunn’s contract was terminated, Anomaly said that the decision was completely unrelated to any objections she raised to meeting spaces.

Dunn, citing the positive response she’s received to her LinkedIn post, says she is optimistic that increased public accountability across the ad industry will help make more people comfortable about working at agencies—and speaking up when something feels inappropriate.

“It’s clear to me that a major shift has begun to take place in our industry,” she tells us. “I hope that by speaking up about this, my voice can make a difference for women within our industry and beyond.”