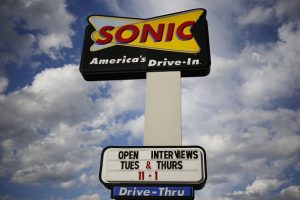 “We’ve mutually decided to part ways with Sonic,” GS&P managing partner Leslie Barrett said in a statement. “Their business is thriving, and we’re proud of what we’ve accomplished together over the past eight years. We wish them well in this next chapter.”

“We’ve had a great eight-year relationship with GS&P and together produced memorable work in a highly competitive market,” added Sonic CMO Lori Abou Habib. “With our new positioning work in progress, we and GS&P agree it’s time to move on to our next chapters.”

Sonic spent around $185 million on measured marketing last year, down from nearly $204 million last year, according to Kantar Media.

GS&P took over the account from Kansas City-based Barkley in 2011 and soon after re-introduced the “Two Guys” campaign (namely comedians Peter Grosz and T.J. Jagodowski) introduced while the chain was working with Barkley.

Sources close to the matter attributed the decision to the agency and client having differences of opinion in regards to the approach to the evolution of the brand’s creative, as well as recent personnel changes. In June of 2017, Lori Abou Habib took over as Sonic’s new CMO and the chain underwent a series of other changes to its marketing department. Last year, Arby’s and Buffalo Wild Wings parent company Inspire Brands agreed to acquire Sonic for $2.3 billion and Sonic CEO Cliff Hudson subsequently stepped down after 24 years last December.

In recent years, GS&P has expanded the scope of that campaign by bringing in celebrities such as Kevin Durant and last year introduced a spin on the approach featuring Ellie Kemper and Jane Krakowski.