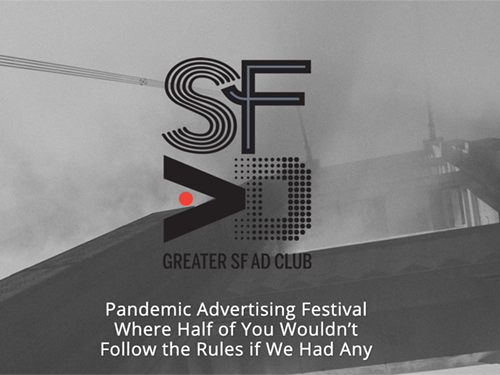 Local ad club awards shows are unique endeavors. For the most part, they are a chance to take a moment and celebrate some great work while, let’s be honest, beefing up the coffers. Cynicism aside, these types of shows are important, and most have long and storied histories.

New York’s Ad Club is responsible for the Andys. Boston’s organization runs an outstanding program with its Hatch Awards. Portland’s Rosey Awards is a hell of a party (disclosure: I’m emeritus status on the board). What’s nifty is that you can see a market’s personality and sensibility reflected in these kinds of shows.

Which brings us to the Bay Area and the Greater San Francisco Ad Club (which one market executive asked: “Are they still running? I haven’t heard about them in a long time.”). The club has an awards gala each spring. But this year, it was moved online due to the pandemic.

Speaking of which, for whatever reason, the Greater S.F. Ad Club decided that it would hold a supplementary awards program that is as timely as today’s headlines: the Pandemic Advertising Festival.

Yes, you are reading that correctly. This is a show and competition for real or fake advertising about the pandemic for a real or fake client.

There were petitions out there to discourage awards shows from this sort of tomfoolery. Still, San Francisco, what with its quirkiness and penchant for zigging while everyone else zags, forges ahead.

According to Mark Landon, the organization’s executive director: “The Greater San Francisco Ad Club is looking for ways to engage both our members, nonmembers and the advertising community at large in ways that might be unique and fun and doesn’t involve another Zoom webinar while we can’t get together. So, while we have unemployed, underemployed and frustrated members of the community, we thought it might be fun to do something, well, fun.”

It’s not so much that the Greater S.F. Ad Club is doing this in the first place. What gives one pause is the almost cavalier tone of the email that landed in our inboxes (you can see the full text here). The pandemic is one of the biggest elephants in the room advertising has ever seen, and it feels a massive stretch to be irreverent to a world in so much pain.

To wit, the part about judges:

Judges will be a prestigious group of unemployed (or underemployed) advertising professionals (what else do they have to do?).

We all know that there have been plenty of layoffs. We also know that it’s pretty tough for a junior to survive in a prohibitively expensive market like San Francisco. Hell, it’s tough for higher-level talent to make ends meet in this market. But does that mean that it’s a good idea to pour salt in an already festering wound? Probably not.

Look, we get the spirit of all of this. And is it a good idea to acknowledge work that addresses … wait for it … these unprecedented times? Of course, it is.

As Landon pointed out, the club is “hoping to see both serious ways of addressing the serious issues (better than some of what we have seen out there) and some outrageous and ridiculous examples laced with parody, irony and humor.”

Yet, this is an incredibly fraught time. Perhaps a more respectful approach would have worked better here. Who knows?