NEXT:San Diego Tourism Campaign Gets Happy With Michael Franti Soundtrack
PREVIOUS:Creative Duo Auctions an NFT for 'Your Next Freelance Team' 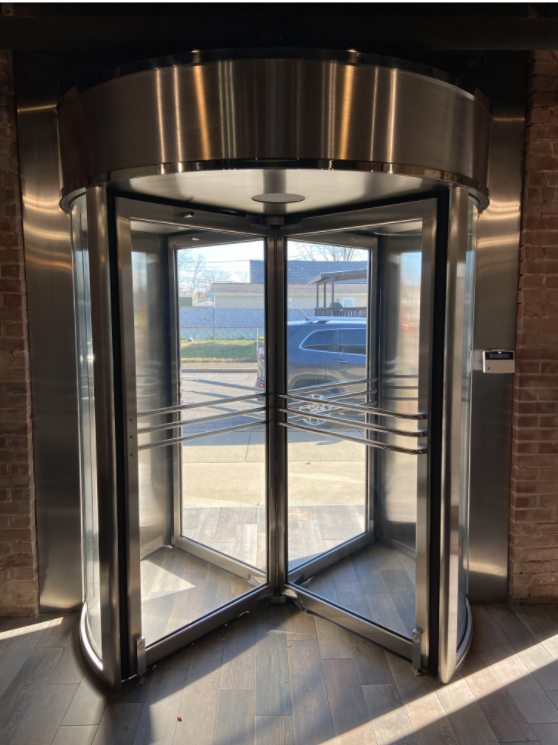 Welcome to our Revolving Door Roster Updates, where you’ll receive weekly notices on personnel shifts at top agencies and companies.

This week was a big one—industry titans expanded new services with big hires, agency veterans returned to their old stomping grounds to bolster creative projects and a few companies completely refreshed their leadership teams. Let’s get into it.

Production company Arts & Sciences’ president Mal Ward has been named the 2022 AICP Show chairperson, where he will lead the esteemed holistic awards and benchmarking infrastructure for the year. This appointment comes after years of Ward both receiving honors from the AICP Show for his work at Arts & Sciences, as well as serving in alternate positions on the show’s committee.

Amazon Music announced the appointment of design industry veteran Byron Merritt as its new vp of design. With more than 30 years of experience at companies like Delta Airlines, Nike and IDEO, Byron’s responsibilities will include leading a multidisciplinary design team across UX, marketing and brand voice.

The purpose of the role is to accelerate Amazon Music’s transition from a music streaming service to a leading audio-first entertainment service with music, podcasts, video and more.

After spending two years at Clemenger BBDO in Australia, Mike Hughes and Dal Almeida have returned to MAV BBDO in the U.K. as creative directors. The duo got its start at AMV in 2012 and spent years working with brands like Snickers, BT and Virgin Holidays, winning numerous awards along the way for branded and social good campaigns. The two said their decision to come back was driven by their love for the “genuine, caring and creative folk (at the agency) that you want to spend time with.”

AntiSocial Solutions announced the addition of Lindsay Renwick to its team as managing director in Toronto. Renwick brings with her 14 years of experience in social roles at digital and creative agencies, most recently as the group director of social at Dentsu Canada. Her new role at AntiSocial will function to oversee creative processes, drive growth and foster collaboration.

Design collaborative Bergmeyer appointed Rachel Zsembery as its first ever female president, bringing the company into a new era of leadership. Zsembery is taking the place of past-president and climate action leader Mike Davis, who is transitioning to the role of director of corporate social responsibility.

AIM-listed social and digital media company Brave Bison has enjoyed a year of impressive growth with the help of new hire Buster Dover, who joined as COO from Zinc Network, and Hannah Kimuyu, who was promoted to marketing director of performance and SEO.

The company reported 47% year-on-year revenue growth, and is planning on launching new partnerships and integrations in the first half of 2022.

Insights strategy group of Engine, Cassandra, has recently welcomed Casey Lewis, a writer, editor and trendspotter formerly at Teen Vogue and New York Magazine, as director and managing editor of the Cassandra Report. The report aims to educate clients on the evolution of youth culture with the help of exclusive insights and intelligence. Also within this role, she will have editorial oversight of the Cassandra Daily, a newsletter distributed to prospects.

Chemistry, independent brand response agency with recent clients including TAB, Red Rat and MTF Finance, announced several new additions to creative and client service. Neil McAlphine is coming from True as senior art director, Jacqui Barry is joining from Dentsu as senior copywriter, Emma Stenhouse is coming to the agency from The Socialites and Renee Prasad and Tori Rogers have joined Chemistry after graduating from AUT.

Haggerty has been open over his years in the public eye about his substance abuse struggle and recovery, and is joining Clean Cause to support its mission to donate 50% of its net profits to funding sober living scholarships. He will provide artistic direction on editorial content, music and creative content and a limited edition can.

Deutsch New York is adding two key creative leaders to its roster: Miriam Franklin as evp, head of integrated production and Metatan Riden as evp, head of art and design. Franklin joins the agency with experience at W+K and Translation, and has worked with brands including Apple, the NBA and McDonald’s. Riden brings her learnings from TBWA/Chiat/Day, Anomaly and Mother, where she worked with brands like TedX, H&M and WSJ.

Following its most successful year ever, Erich & Kallman has added two new leadership roles to the team to supplement and amplify its recent growth. Kati Haberstock, coming to the company with 25 years of international experience, is joining the team as executive head of production. Sarah Holbrook, previously senior director of brands at Phillips 66, is joining as director of brands.

Production company Hecho Studious named Luis Farfán, experienced creative director at Sundance and Vice with experience working with Nike, Vans and Anheuser-Busch, as its new head of content. In this role, Farfán will work to expand the agency’s capabilities of storytelling within the world of sports and culture.

Hill Holiday has welcomed industry veteran Avin Narasimhan as its chief strategy officer, hoping to fuel continued growth in 2022. Having previously worked as CSO at media and marketing communications agency PHD, Narasimhan brings with him years of expertise. He will work in tandem with the agency’s recently appointed chief creative officer, Icaro Doria, to drive the company towards new business and talent in the coming year.

Brand heritage and archives management company Heritage Factory, announced its new executive team designed to transition the firm into its next era of growth. The team is comprised of Jason Dressel as CEO, Alan Maites as chief solutions officer and Adam Kirshon as chief operating officer. All three previously held executives and senior lead roles at History Factory, and are transitioning to their new positions as part of a long-term succession strategy that has been in the works since its announcement in February 2021.

Kepler co-founder Remy Stiles has been named the global digital services agency’s CEO of North America, entering a role where she will lead a 600+ employee media and consulting team in the U.S., Canada and Costa Rica. Stiles has spent over 10 years at the firm since helping to found it in 2012. This transition is her next step in accelerating Kepler’s continued growth.

Marketing and advertising agency Level Mpls has transitioned to a women-owned business with the announcement of its new owner, Lois Dirksen. In the midst of a transformative shift at the agency responsive to sociocultural shifts, Dirksen is joined by two more female leaders: Kim Thelen as president and chief client officer and Erin Gwiazdon as vice president, operations and growth. Level Mpls aims to help brands adapt and thrive in today’s climate.

Amid an exciting period of growth, London Alley promoted Matthew Kauth to commercial executive producer, where he will report directly to the agency’s leadership team and run point on all commercial and direct-to-brand projects. Filling his former position as head of production is Sarah Morrison, a producer coming from Serial Pictures with more than five years of industry experience.

Following a period of growth and transformation, M&C Saatchi appointed Christian Davis as its managing partner. First joining the agency in 2015 as an account director, Davis worked his way up to business director. He was promoted to his new role through M&C Saatchi’s connected talent initiative, which advertises open positions across company departments. This promotion comes quickly after Sophie Lewis’ appointment to chief strategy officer at the agency.

Oberland welcomed Lisa Topol as its managing partner and executive creative director, where she will lead the agency in partnership with co-founder and CEO Drew Train and managing partner and chief strategy officer Kate Charles. Topol has been named in Business Insider’s top 30 most creative women in advertising list, was honored in the Creative 100 by Adweek and has received prestigious awards from Cannes, Clio, Andy and more.

Ogury, a global mobile advertising company anchored in privacy protection, has appointed Ossie Bayram as U.K. country director. In his role, Bayram aims to increase Ogury’s position as the go-to mobile ad partner for all agencies and brands, as well as strengthen relations with local publishers.

Bayram has more than a decade of senior level experience in the publishing and advertising industry, having worked with news and magazine brands including News U.K.’s The Times and The Sun, Minute Media’s 90 Min as well as fast-growth startups. Prior to joining Ogury, Bayram worked for Schibsted, the owner of leading newspapers in Norway.

Audience platform for publishers and marketers, Permutive, announced its appointment of Mark Pearlstein as its new chief revenue officer. Pearlstein is no stranger to this position, having held this same role at SilverBullet and DoubleVerify. Permutive’s mission in this hire is to propel advertisers’ adoption of the privacy-first infrastructure it says is necessary to safeguard revenue, protect privacy and scale direct relationships with premium publishers.

Reach Agency appointed Jorge Mendoza, an industry expert with 12 years of experience in social and digital strategy, as its director of gaming strategy. In this role, Mendoza will lead efforts for clients including Nestlé and XBOX Game Pass.

Space & Time nabbed Wavemaker’s technical account director, Alex Moran, as its newest SEO lead, responsible for leading and growing its SEO department. With extensive experience in SEO at companies like iProspect, his goal will be to launch Space & Time’s local SEO product.

Sterling Rice-Group (SRG) named Daniel Carpenter as its managing director of culinary, where he will work to expand numerous culinary initiatives, including recipe development, innovation, menu strategy and culinary trend forecasting. Carpenter brings to the position a diverse range of experience as an attorney, chef, culinary consultancy principal and, recently, the vice president of culinary at virtual kitchen company Nextbite.

Trusted Media Brands announced a number of transformative actions taken by the entertainment company, including a new brand identity which changes its name officially to TMB, accelerated growth plans for the upcoming year and new additions to its C-Suite.

Technologist, designer and growth leader Mauricio Andujar has joined business and brand transformation firm Vivaldi in a global partner role. With strong expertise in digital products, services and ventures, Andujar is beginning his role with the goal to deepen digital transformation and innovation capabilities across Vivaldi’s global markets.

Jeff Hale, previously the owner of his own design consultancy working with Tabasco and Edrington International, is joining independent creative agency Walrus as its new head of design. Hale will oversee full-service and design-only clients like EngageSmart and Lowes Foods. This full-circle transition is rooted back in Hale’s early career days, when he spent much of his time freelancing for Walrus as a designer for most of its accounts.

WRG, a global experience agency under The Creative Engagement Group, has unveiled its new leadership team as a response to growth, product innovation and new client wins.

Tim Collett, with more than five years of experience at the company, is heading the team as agency managing director. Collett will be joined by Mark Jackson as head of environments. A larger global team is comprised of Gemme Burke leading the hybrid and virtual events team, Lucy Stewart and Chi Siroko co-heading the delegate experience team, and Anna Thomson and Emma Saunders leading the healthcare logistics and congress team.

Wunderman Thompson welcomed back agency veteran Joe Dy as its chief creative officer. Since first working at the company in the early 2010s, Dy has built his career at a number of prestigious agencies, receiving awards from Cannes, Clio, The One Show and more. He returns to Wunderman Thompson to work directly with CEO Golda Roldan to drive business and growth creatively.