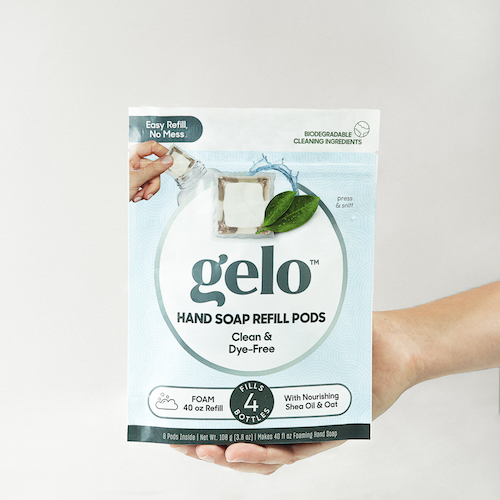 Gelo, a plant-based refillable hand soap brand which launched this April has become the latest brand in a trendy category to appoint Mischief, the agency launched by former BBDO CCO Greg Hahn earlier this year as part of Canadian agency No Fixed Address, as its creative agency of record.

“Right away, we realized we had a lot in common with the Mischief team: a penchant for originality, huge ambitions, and (practically) the same birthday,” gelo founder and CEO Curan Mehra said in a statement. “We set out to make a big impact on the category and the planet, and we’re excited to partner with Mischief to build gelo into an enduring brand.”

Mehra launched plant-based soap gelo with a design based around refillable pods which dissolve in reusable bottles and has grown to about $10 million in sales in less than a year.

Available at a number of retailers including Bed Bath & Beyond, Safeway, ShopRite, Urban Outfitters, Stop & Shop and Wegmans or direct-to-consumer online, gelo benefits from an increase in hand soap purchases and a consumer move towards e-commerce and more environmentally-friendly purchases. The liquid hand soap category has seen an increase of 76% in sales year-on-year since March, according to IRI data, while a recent gelo survey found an increase of 43% in the number of people buying hand soap refills in 2020 and a 16% increase in consumers switching from in-store to online purchases.

“Obviously, we have a personal affinity for any brand born amid a global pandemic and one of the worst economic crises in living memory with the sole agenda of disrupting its category,” Mischief ecd Bianca Guimaraes said in a statement. “The hand soap market is exploding, but there is nothing like gelo’s product out there—it’s unique, helps solve multiple problems at once and is poised for creative disruption. We couldn’t be more thrilled to be working with them.”

The appointment comes on the heels of plant-based frozen foods brand Alpha Foods naming Mischief as its agency of record earlier this month.