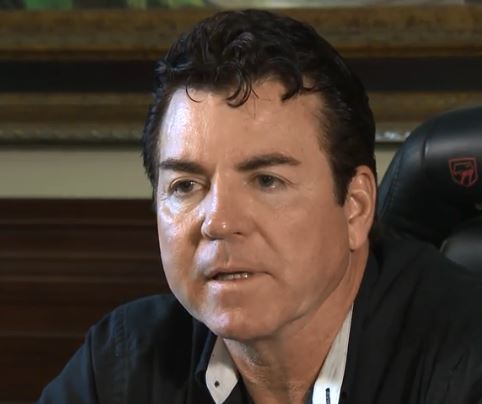 The pizza drama continued over the weekend as Papa John’s founder John Schnatter doubled and even tripled down on his claims that former AOR Laundry Service bears a major share of the responsibility for a May call in which he uttered the N-word and made comments about lynching, according to a report in Forbes that he later confirmed.

In a Friday interview with a local radio host, Schnatter said that Laundry Service staffers had “pressured” him to engage in the conversation that led to him using that word while referencing Colonel Sanders.

And in a second interview with a CBS affiliate, he went so far as to claim that the agency “extorted” his company and demanded $6 million “to make [the story] go away.”

The full interview is worth watching; the agency conversation starts around the 8:30 mark.

One may note that Schnatter did not name Laundry Service in this interview, but he did make clear in the previous interview that this was the company he was referencing.

In the video above, he claimed that an unnamed agency executive said, “If I don’t get my f-ing money, I’m going to bury the founder.” He later said, “We didn’t pay them, they ran to Forbes, and the rest is history.”

Forbes’ story went live the morning after Adweek broke the news about Laundry Service laying off at least 40-60 employees and parting with CEO Jason Stein. It would appear, based on subsequent statements about his new venture, that Stein had been planning to leave Laundry Service for some time.

The story also claimed that Schnatter pushed out Papa John’s CMO Brandon Rhoten after he suggested that the company stop putting its founder in all of its ads and even hired another unnamed agency to start making spots that featured him—as did the brand’s work with its previous AOR, Grey.

In response to a tweet announcing Stein’s new business, Rhoten wrote, “Can I be the first client, please?”

Schnatter went into more detail about the incident in the interview, stating that an unnamed “third party” in the meeting in question repeatedly used the N-word and that the agency pushed him to engage.

“I was provoked a little bit,” he said regarding the conversation that led to him using the word. According to Forbes, he also recalled during the same call that black individuals were lynched in his hometown during his childhood.

In the interview, he continued to state that he used the word only when describing Colonel Sanders of KFC fame.

A Laundry Service spokesperson said the agency has no additional comment on Papa John’s at this time. The company’s PR declined to comment beyond a release today that confirmed Schnatter will no longer be the brand’s official spokesperson or use its offices in Louisville.