Ogilvy & Mather India managing partner Chandana Agarwal weighed in on the “Me Too” social media campaign with a post, screencaptured by an Ogilvy & Mather employee, in which she dismisses certain types of sexual harassment as “part of growing up.”

The Vagabomb reported that when the Ogilvy employee shared the status, she “requested anonymity and feared for her safety.”

In the post, Agarwal expressed “many issues” with the “Me Too” campaign “at many levels.” She went on to claim the issue should not be about things “like someone grabbing at you or pinching you and that “there are some experiences that are just part of growing up especially in India.”

She adds that “there are some experiences that are part of growing up anywhere in the world” and seems to suggest that these include “a boss/ a colleague/ a teacher trying to act fresh” and that “this is not about that.”

Agarwal concludes by saying the conversation should be about more traumatic experiences of abuse than the ones she suggested and that “By making it so general we are being unfair” to those “who have been scarred” with such experiences, ending with the hashtag, “#notme.” 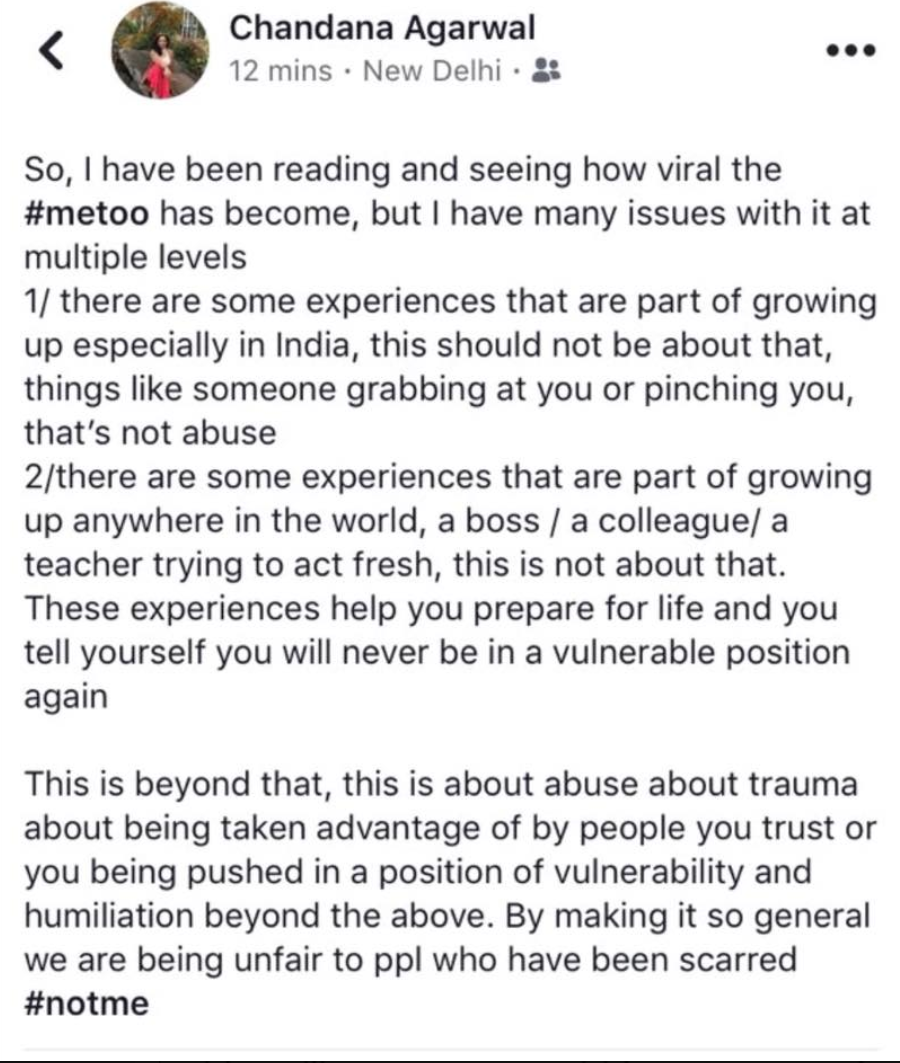 Harnidh Kaur shared the screenshot on Facebook and explained: “This screenshot was sent to me by a current employee who chose to stay anonymous (for obvious reasons), who very rightly pointed out that this made her feel actively unsafe at work. Calling out women who propagate a toxic ability when they have the power to change things for the better is as important as calling men out.”

She likened Agarwal’s line of reasoning with the “line of minimising so many survivors face” and pointed out that Ogilvy & Mather is the agency behind Dove campaigns which she claims “exploits important ideologies and beliefs.”

This week we also learned that Ogilvy & Mather’s holding company, WPP, continues to employ Gustavo Martinez, who appears to be leading its operations in Spain, while a sexual harassment and discrimination case filed by JWT global head of public relations Erin Johnson continues.