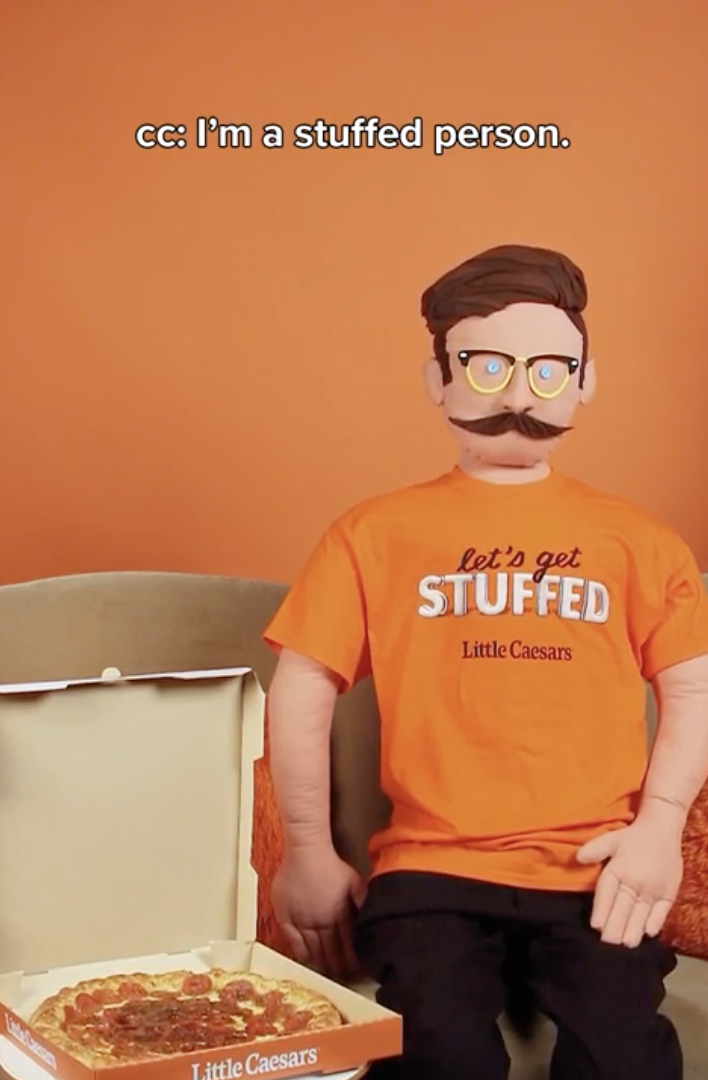 Several lucky influencers are finding out how they would look with some extra padding thanks to a very “out there” activation that embraces the quirky whimsical tone for Little Caesars advertising.

As part of the continued momentum behind last month’s Extra Stuffed pizza launch, the chain is delivering “stuffed people”—life-sized dolls stuffed with nine feet of felt cheese and pepperoni stuffed inside of them. “Good thing you have a stuffed doppleganger do your boring stuff so you can leave and stuff your face with Pepperoni and Cheese Stuffed Crust,” Jeff Klein, chief marketing officer, Little Caesars told Adweek.

Little Caesars and its AOR McKinney modeled a few of these “stuffed people” off of popular TikTokers, including Spencer X, Adam Waheed, The McFarlands and Brooke Averick (Lady Efron).

These TikTok stars will then create a series of videos on their accounts featuring their stuffed versions doing the mundane tasks they want to avoid. The first Little Caesars branded video debuted Wednesday, with three more scheduled drops set for July 22, 23, and 26. The first TikTok influencer video launches July 26. Lastly, one “super fan” known as (@westheghost) will also receive a stuffed doll.

“Little Caesars is distinct in the pizza category for many reasons, not the least of which is our brand voice and personality,” Klein said. “We identified TikTok as a whitespace platform where we could get in early and express this fun personality in a new way to young, highly-engaged audiences. It’s no surprise that TikTok users have really embraced Little Caesars and have made us the most-followed pizza brand.”

In partnership with Little Caesars, Klein collaborated with designer Russ Vick, Horizon Media and Blue Hour Studio to source and select the influencers. As we vetted potential creators, we kept a lens on TikTok influencers we knew would be able to authentically reach our target audience, but also on creators who had a strong, humorous point of view.

The campaign illustrates both the opportunities and challenges in evolving messaging away from a one-time stunt into something more memorable, Klein added. “Creative and media teams work in tandem to ensure fresh assets and key activations go live at specific stages for optimal impact. Lastly, each of our campaigns are designed to create conversations between consumers. When we get it right, consumers themselves become a valuable part of our media mix.” Each of influencer creators will post at least one video asset on his or her TikTok channels.

“A core focus of Little Caesars’ social strategy is to age down the brand by building brand affinity with Gen-Z and younger Millennials,” said Klein. “As TikTok usage began to soar amongst this target, and during the pandemic, we embraced the platform as a core channel in our overarching social strategy.”