“What would you do for a Klondike bar?” has become an iconic phrase in advertising over the last 40 years—and it has spawned many memes and a few off-color jokes. Now, the infamous ice cream snack is getting a larger-than-life campaign for its 100th birthday.

In celebration of the Klondike centennial, agency VIA has joined forces with Colossal Media and Overall Murals to create hand painted murals in New York, Chicago and Los Angeles—and they’re all interactive. 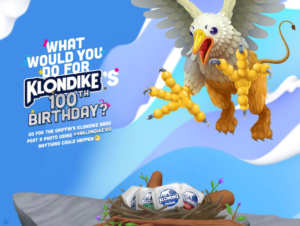 Each mural features a “What would you do for a Klondike?” challenge, where passersby can reach for the Klondike on the selected mural, take a picture and share it on social with the hashtag #4aKlondike100, all to get their hands on an actual Klondike bar. The obstacles include surfing into a shark’s mouth, risking alien abduction, stealing eggs from a mother griffin and more. Some murals create the illusion that Klondike lovers are running from monsters or free falling through the sky, all for a Klondike bar.

“Klondike doesn’t just make ice cream, their history of asking ‘What Would You do for a Klondike Bar’ creates experiences,” Amos Goss, executive creative director at Via told Adweek. “We recognized something similar with Colossal and Overall—they don’t just create billboards, it’s an experience to stand in front of their hand painted murals. So we knew from the beginning we wanted the murals to be an experience, where pedestrians could step into a ‘What Would You Do?’ challenge.” 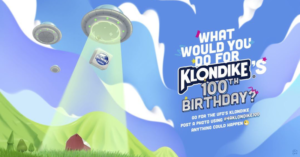 For the project, the VIA team tapped Brooklyn-based Venezuelan artist Carlos Miranda to illustrate the scenes in a playful graphic style.

“In developing the characters and obstacles for these challenges, it was all about what would be fun to play with at such a huge scale. We knew we wanted aerial attacks for the center of our largest billboard (i.e. a UFO and griffin), as well as some attacks from the sides on the edges (i.e. dinosaur and shark). We’re also incredibly excited about playing with perspective. For example, one billboard makes it look like you’re falling through the sky for a Klondike Bar, simply by taking your photo and flipping it upside down,” said Goss.

Goss continued that while the primary goal was to garner awareness for the brand, “If someone did something a little silly and out of the ordinary for a Klondike, or saw on social media that their friend got in a dicey situation with some aliens for a Klondike, that they think of the brand with a smile and had a sudden urge to eat one. We also see this as an opportunity to connect with a younger, more urban audience to drive new relevance for the brand.”