NEXT:Production Company Behind 2017's 'Incognito Hip-Hop Video' Is Back With a New Fake Infomercial
PREVIOUS:Performix Chooses Merkley+Partners as Its First-Ever Agency of Record 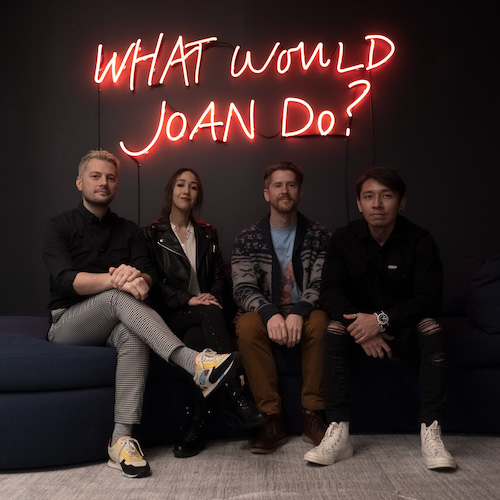 Joan has added some heads to its creative department.

Mica Gallino (pictured, second from left) joins Joan Creative as an associate creative director, following around two and a half years as a senior creative art director with Johannes Leonardo, working with brands including Adidas Originals and Bleacher Report. Before that she served in the same role at Ogilvy and then CHI&Partners. She has worked with clients including Coca-Cola, Samsung, The Wall Street Journal and Huggies.

Bryce Hooton (pictured, second from right) joins Joan as an associate creative director, following over four years as a copywriter and associate creative director with Publicis New York, where he worked on Diesel’s “Go With The Fake” campaign. He previously served in copywriting roles with TBWA\Chiat\Day and Ogilvy in Los Angeles. Over the course of his career, Hooton has worked with clients including Nissan, Wendy’s and P&G.

Senior art director Giancarlo Rodas (pictured, far right) arrives at Joan from Impact BBDO Dubai, where he led regional campaigns for Mars, KFC and Mercedes as a senior creative. Prior to that he spent over two and a half years as a senior art director with Circus Grey in Lima, Peru, where he helped the agency become the most awarded Peruvian agency at Cannes.

“This is really an exciting time for Joan, between all the new people that have joined our amazing team in the past few months, and our recent move into our incredible new offices,” Joan co-founder and CCO Jaime Robinson said in a statement. “Our people are the heart of the agency and we take a lot of care to ensure that everyone we bring on will be able add to our collective brain power and our unusual way of creating powerful work that moves culture. Mica, Bryce, Fernando and Giancarlo are all Joans, and Dan and I can’t wait to get started creating great things with them.”

In terms of Joan’s recent creative work, you remember this Queen number for Google Pixel.