NEXT:Thursday Morning Stir
PREVIOUS:Here's What Happened at Argonaut This Week 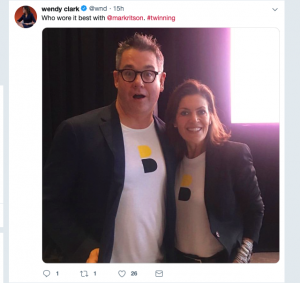 DDB Worldwide unveiled its new brand identity at its global conference in Miami on Wednesday: a revamped logo consisting of two Ds stacked on top of each other—one yellow and one black—to form a B.

This logo is part of a larger rebranding effort, according to several people who have spoken to AgencySpy on condition of anonymity. The reasoning behind the rebrand, or what else it entails, is unclear at this time.

A spokeswoman for DDB declined to discuss the identity shift, which was introduced internally at the conference that featured an A-list lineup of speakers, including legendary producer and musician Nile Rodgers of Chic fame.

DDB Worldwide CEO Wendy Clark posted photos of herself and Rodgers as well as marketing columnist, professor and consultant Mark Ritson sporting T-shirts with the new logo on them.

DDB Australia also noted the change, tweeting out the burning question of the day from their account.

Is that a new logo we see? Watch this space… #ddbtogether https://t.co/5HjyddY7kf

One person close to the organization also said Clark and other employees have been sharing images of the conference and the new logo on social media over the past day, though some deleted these posts soon after they went live.

Other employee posts from the conference include the tweet below from Brent Choi, who joined DDB Canada as CEO and chief creative officer in January after abruptly stepping down from his role as president and CCO of JWT in Canada four months earlier. Choi posed with U.S. Paralympian athlete Tatyana McFadden, who also appears to have been a speaker at the event, in a photo posted to his Twitter.

Had the honour of meeting the most accomplished Paralympic athlete ever @TatyanaMcFadden #inspirational @DDB_Worldwide pic.twitter.com/iUWPFnILNm

Just hanging with the fastest woman in the world. NBD. #teamUSA 🎤⬇️

One person close to the business called the rebrand a “distraction,” adding, “They don’t need repositioning. [They] need to start doing exciting work for their clients.”

DDB has won several new accounts in recent months including, most prominently, the U.S. Army. In a legal protest filed with the U.S. government last December, WPP’s Possible claimed that the Omnicom team led by DDB scored that business by lowballing the competition on price. A heavily redacted document listed DDB’s billings over the full 10-year contract at $136 million.

While the agency has not lost any significant accounts of late, it did see pivotal client McDonald’s send the McCafe line to TBWA\Chiat\Day and ultimately failed in its attempt to win VW’s business in the U.S.