-Current, a mobile-only bank, gets cinematic with a horror-themed promo, “Two Days in Hell.” The faux film trailer follows friends on a road trip. When they break down in the desert, they need cash, but their bank won’t release their paychecks for two days. Mayhem ensues.

-So, how’s your Meta day going? The internet has a lot to say about the new Facebook company name? 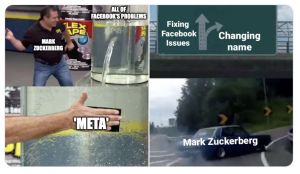 -Speaking of meta, Swedish oat milk brand Oatly has made the most meta ad ever as it takes its self awareness campaign to peak awareness.

-Sun-Maid and agency Quench are highlighting that nobody likes a house that gives raisins for Halloween, setting up a special Raisin House for trick-or-treaters in New Jersey.

-A new Coca-Cola ad, “Ghost,” created by dentsumcgarrybowen UK, sees a boy creep about the convenience store he lives above late one night after hearing some odd noises.

-In one of the weirder Halloween stunts, My/Mochi ice cream will host “live tongue readings” by a “spooky soothsayer” named Melinda Mouthfeels.

-General Mills’ favorite monsters have reunited for a remake of the classic Halloween hit, the Monster Mash. The super group of Choc, Frank, Boo, Frute and Yummy (wait, do people remember those last two?) have reunited for the first time in decades and a behind-the-scenes video shows how it was all made, with appearances by Lucky the Leprechaun, Trix the rabbit and Travis Barker. The song can be found on Spotify and at a dedicated website.