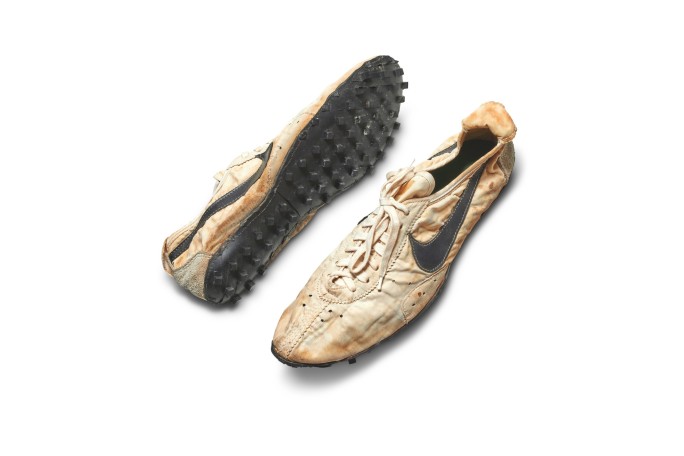 Last week we noted that former MDC Partners CEO Miles Nadal is still a very wealthy man, as judged by his taste in rare cars, motorcycles and sneakers that no human will ever wear again.

Today we have to give the ex-agency executive kudos once again as Sotheby’s confirmed that he successfully persisted in his efforts to acquire the crown jewel in the “Sotheby’s Stadium Goods: the Ultimate Sneaker Collection” online auction.

To say that he set a world record for shoe sales would be the understatement of the day, which is especially impressive during a dramatic week like this one. It would be more accurate to say he obliterated, eviscerated and/or annihilated that record, paying $437,500 for the 1972 Nike “Moon Shoe.”

From Sotheby’s own (definitely not self-serving) announcement:

“The previous world auction record for any pair of sneakers was $190,373, for a pair of Converse worn (and signed) by Michael Jordan in the 1984 Olympic basketball final; this pair sold in 2017.”

And the initial pre-sale estimate on this pair was only $160,000. It’s enough to make one wonder what the true value, sentimental or otherwise, of such footwear might be in this real world of ours. It will now live forever in his own private Toronto museum, which he plans to open “to his friends, family, charitable organizations and others upon request.”

Sotheby’s and Stadium Goods didn’t go along with Nadal’s initial offer to buy all 100 shoes in the collection, opting to keep this particular pair up for public auction so as to drive up the price—and so they did.

But Miles just had to have it.

“I am thrilled to acquire the iconic Nike ‘Moon Shoes,’ one of the rarest pairs of sneakers ever produced, and a true historical artifact in sports history and pop culture,” read the statement Nadal provided to Sotheby’s. “When I initially acquired the 99 other pairs in this auction last week, I just knew the Nike’s had to remain part of this remarkable collection, and I couldn’t be happier with the result. I think sneaker culture and collecting is on the verge of a breakout moment, and I hope Sotheby’s and Stadium Goods will continue to lead the way in this exciting new future.”

As always on social media, some users had opinions to share on the nature of this acquisition. The takes, they were hot.

And as before, his private equity firm has not responded to a request for comment. But there’s really not much more to say here, is there?