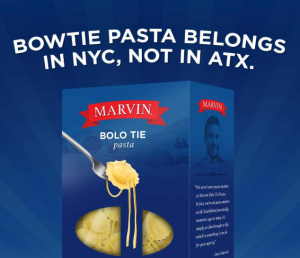 When we hear the phrase Austin, Texas, we think of several things, chief among them SXSW, Matthew McConaughey and GSD&M. Stuffed pasta, however, is one of the very last items that comes to mind.

Freelance creative director Dan Marvin wants to change all that with his new innovation, Marvin Bolo Tie Pasta (not bow tie, get it?).

The longtime copywriter, who worked at Commonwealth/McCann, Doner, GTB, Havas and more before headin’ down south in recent months, collaborated with Commonwealth cd, art director Dave Muller to concoct the sort of edible/wearable combination that’s somehow “on brand” for both your neighborhood Italian eatery and the rich oil guy from The Simpsons.

Why? To get work, of course.

Being completely baffled by this project, we had to know more.

AgencySpy: So, how did this come about? What brought pasta and bolo ties together for (we think) the first time?
Dan Marvin: I’m new to Austin, and even newer to freelancing. I thought creating a pasta that is the antithesis of bourgeois bow tie pasta might make me endearing to the Austin ad community. I collaborated with Commonwealth-McCann cd, art director Dave Muller to create Marvin Bolo Tie Pasta. Just a couple of Midwesterners making a pasta brand for Southwesterners.

Can you confirm on record that the pasta in question is cheese ravioli?
The pasta is the result of ravioli and linguine hooking up on a hot Texas night. Their love boiled for 7-10 minutes, stirring occasionally, and Marvin Bolo Tie Pasta was born, drained and served immediately. 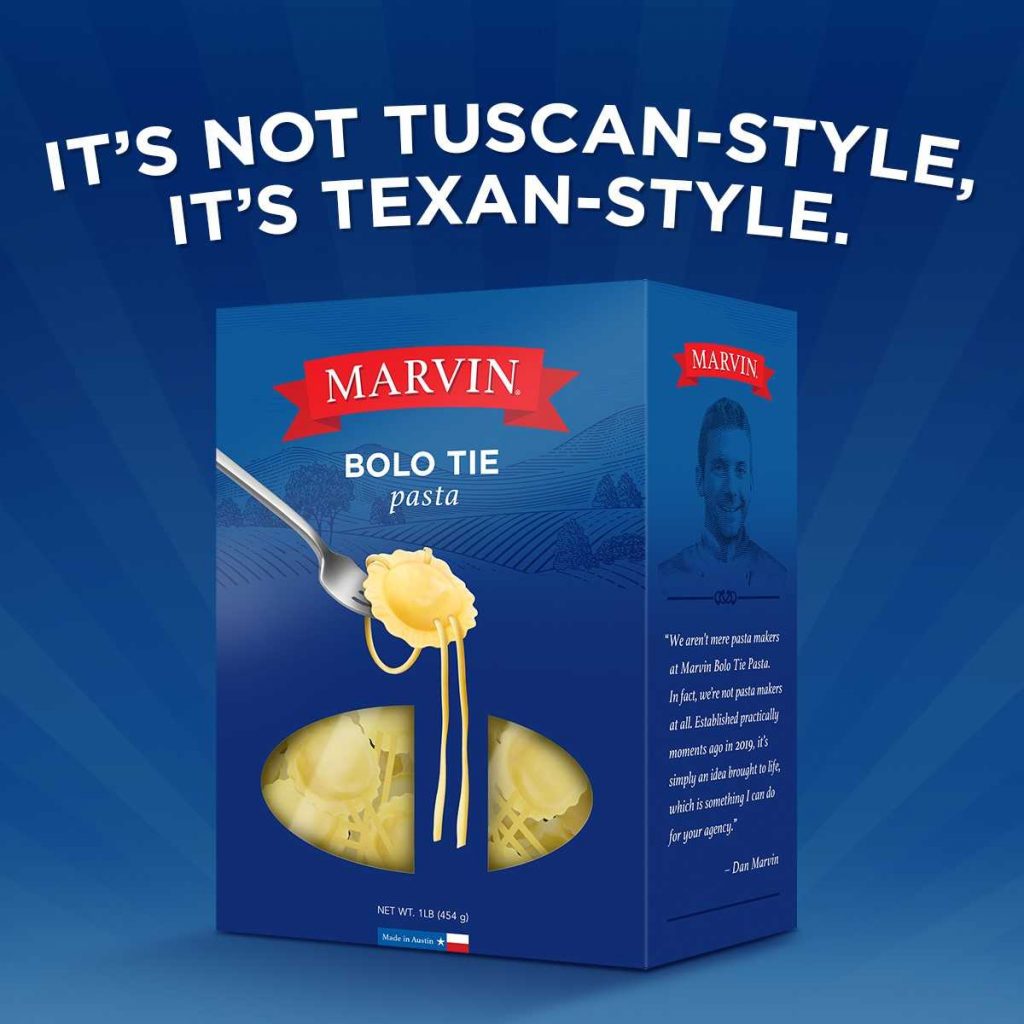 Are you even Italian? (Not that this is relevant.)
I’m not Italian. I’m just a Freelance cd/writer/pasta maker upper who will fill your social feeds with fake food.

On a more serious note, how does the Austin agency scene compare to other cities, and did its identity have anything to do with the development of this project?
The Austin ad scene is different in how friendly and welcoming everyone is. They’re also hardworking and creative, but I love when I mention how well I’ve been treated and get in response: “Good. Everyone better be treating you right.” It happens almost every time. They’re protecting Austin’s reputation, and I love it. So I wanted this project to be a bit of an oddball ode to Austin agencies.

How have you been distributing this (fake) pasta?
All distribution of the pasta has been virtual through the Marvin Bolo Tie Pasta Facebook and LinkedIn pages. Once there, pasta seekers learn that Marvin Bolo Tie Pasta isn’t actually pasta at all, it’s simply an idea brought to life. Which is something I can do for their agency and clients. All posts are meant as a sampling of work, while directing you to BookOfDan.com for more. I emailed and messaged agency contacts I already had.

And what has the response been like from recruiters and creatives?
I’ve gotten all positive responses so far. The recruiters and [creative directors] who have responded [mostly via email or LinkedIn messages] get the joke, and I think get that I get Austin. Which is what I was going for.

Is scoring a gig as hard as Fishbowl would have us believe? And are you up for full-time and part-time work?
Finding work is tough for almost everyone, so making the effort to put yourself out there and come up with work that stands out is necessary. Even if it means adding Pasta Maker Upper to your title. I’m new to freelancing and really enjoying it. I’d be open to the right full-time gig though.

We hear a whole lot about creatives getting ghosted by recruiters. How common is that?
Ghosting is real and it happens often because people are busier than they are polite. But I’m not afraid to be persistent in the friendliest, most professional way possible. I’m also a children’s book author and before I got an agent would get ghosted by publishers and literary agents. It sucks, but I don’t take it personally.

While you’re here, check out the portfolio link again. Lots of Chevy trucks in there!

(Sadly, Marvin declined to comment on what the Droga5 acquisition MEANS for creative ad agencies, thereby becoming the only person in the entire ad industry who has yet to weigh in.)