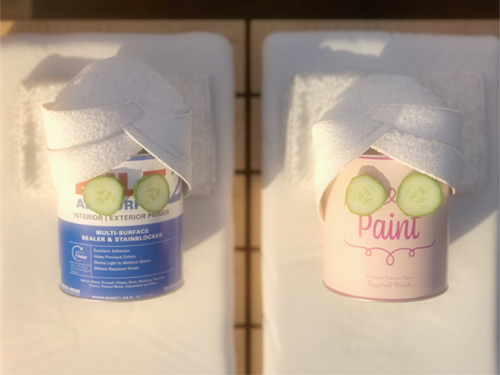 Before things started getting really hectic around the globe due to the coronavirus crisis, we were pitched some work from a Los Angeles agency, Arcana Academy, for paint primer brand Kilz. You’re reading that right. And, get this, the target was the vaunted older millennial (or, sigh, Xennial) audience.

Past the subject line, we got a short description and a link to the 30-second ad. After a first watch of the love story between a can of Kilz and a can of paint, we thought, “This is kind of cute, but also corny.” The REO Speedwagon hit as the music bed kept us interested.

It wasn’t exactly a hard no … but it wasn’t necessarily a yes, either. We wanted to give it a fair shake, so we asked about whether or not the ad went through any research or testing.

“Oh, yes. And you wouldn’t believe how it scored,” said the PR working on the account.

So, that’s interesting. And, based on the story of Shane Hutton, Arcana’s co-founder and ecd, the agency thought that there may not have been a snowball’s chance in hell that this “Instagrammable” and social idea would see the light of day.

“As silly as it sounds, the relationship between paint and primer is actually reflecting back to our Xennial target audience’s life stages they are currently experiencing,” he said.

A further stream of consciousness from Hutton, which outlines the importance of trusting one’s gut, then testing creative to make sure it works:

To draw awareness to our product, we knew that we had to be interesting. We had to be engaging, and we had to be entertaining. Otherwise, we would be overlooked. For a utilitarian category like primer, that meant fundamentally rethinking the way we approach our market communications.

It’s become a cliché in the ad world, but we needed to find a way to break through, and that meant ignoring many of the long-established rules for this category.

There’s always fear associated with any idea that is genuinely new and novel. If you’re 100% comfortable, you’re probably not pushing the envelope enough. Being unique and interesting is always a risk because if you do it wrong, you could just end up being weird.

For this audience, we wanted to distill things down to the most straightforward, most universal message: paint and primer were made for each other.

We went back to the “old-school” way of doing advertising, the KISS method, Keep It Simple, Stupid. (But we say “Keep It Simple, Silly” because we are fully aware that this spot is in fact quite silly and really for us, that’s the appeal.)

“Silly,” “absurd,” “over the top,” words we believed would resonate with our target audience as “funny” are not always words that translate as funny to a focus group. To mitigate the risk, these spots had to be tested in a focus group.

Very often, people in focus groups want to get the answer “right,” so they look for things they expect to see. When they see something they don’t expect, there’s an assumption that what they’re seeing must be ”wrong.” And because they want to be right, they very often attack that thing.

If you want to kill something truly new and novel for which there is no frame of reference, put it in a focus group. And I guess that was the first time our instincts were confirmed with this idea. The focus groups loved it.

92% of respondents said it was different than any other primer or paint advertising they had seen before.

82% of respondents remembered the name of the brand.

82% of respondents felt that the spot communicated that primer and paint were made for each other.

59% of respondents said they are more likely to use Kilz after seeing the ad.

Although it was something none of us had ever seen before, the absurdity of a paint can and a primer can falling in love is certainly something we’d never seen before. People enjoyed it, and more importantly, they understood it. The takeaway, overwhelmingly, was that paint is really best when coupled with a primer.

This target group is very intelligent, curious and active about seeking out information on things that interest them. If there is interest in the general awareness campaign, we are confident they will go online to find out the nuts and bolts about which primer they need for any specific project they have in mind.

So far, the response has been great. The general awareness campaign is driving web traffic where people are finding out more detailed information about the specific advantages of different primers for different projects.

So the lesson here? Testing can sometimes get that crazy idea to the finish line. It’s counterintuitive at times, but could be the tool that does the trick.

Oh, and you can see the rest of the campaign on the agency’s Vimeo page.