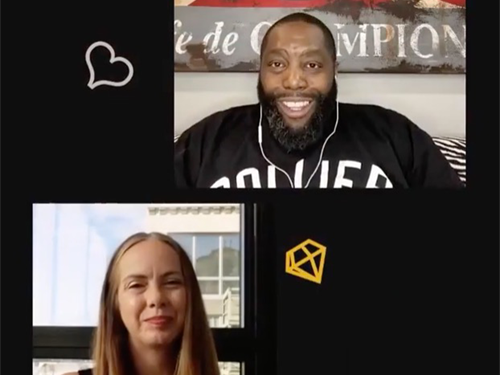 One of the more powerful moments in the aftermath of George Floyd’s killing happened at an Atlanta press conference. As violence began to erupt in the city, rapper Killer Mike (born Michael Santiago Render), the son of an Atlanta police officer, delivered an impassioned speech, asking protestors not to vandalize the city.

Evoking Martin Luther King Jr. and peaceful protest, he said, at the time: “I am duty-bound to be here to simply say: That it is your duty not to burn your own house down for anger with an enemy. It is your duty to fortify your own house, so that you may be a house of refuge in times of organization. And now is the time to plot, plan, strategize, organize and mobilize.”

GQ chronicled the evolution of Render’s advocacy, calling him “one of the loudest and most original political voices in the country.”

With a strong, but sometimes complex point of view, design and animation studio Buck enlisted Render—one half of hip-hop group Run the Jewels—to share his thinking on representation, specifically in an area of creativity that lags in diversity.

Artist and activist @killermike talks about his involvement with the animation industry, Black Lives Matter, the 2020 election, and how we can help champion real, meaningful change.

“We want to amplify the Black Lives Matter movement and we want to create change in the design and animation industry,” said Buck COO Madison Wharton, who hosted the conversation with Render on the agency’s social channels. “We felt that one of the most effective tools we have in our arsenal is our Instagram following of 240,000 people. Killer Mike is one of the most inspiring activists and creatives in America today. We hope that this is the first of many conversations we share with our audience about racial inequality and about diversifying the creative class. Also, Killer Mike for president.”

Render has some animation experience, collaborating with Cartoon Network’s Adult Swim on its Singles Program, music released on the brand’s platforms. He also noted that he’d been a drawer and sketcher for his entire life, sharing his experiences about the craft.

The discussion moved to advocacy and how creative companies can eliminate barriers in bringing underrepresented talent into the field and whether or not brand statements supporting the Black Lives Matter movement could be a force for positive change.

On the latter, Render gave a vital history lesson about brands and advocacy, telling the story of how apartheid in South Africa ended as consumers demanded that companies divest from the country.

“Blacks in major cities like Atlanta [and Washington,] D.C. started to tell places like Coca-Cola and Delta [Air Lines] that if you don’t divest from South Africa, we’re going to divest our dollars on you. So if you look at a place like Atlanta—that’s the home of Coca-Cola and one of the largest hubs for Delta—they paid attention very quickly,” he said.

The duo further discussed worldwide protests, the upcoming election and Render’s close relationship with Atlanta Mayor Keisha Lance Bottoms. But, perhaps most importantly, the conversation ended with a rallying cry of unity.

“I just want to encourage everyone out there to befriend someone who is not of your ethnic background, who’s not of your religious background, who doesn’t look like you befriend them and exchange information and learn from them,” said Render. “If you have an opportunity, make sure someone who doesn’t look like you or hasn’t had the opportunities gets to replace you in this seat. So if you’re an animator, illustrator [or] creative, let’s make sure that we’re in the business of growing more of us by mentoring young people and encouraging and helping them.”