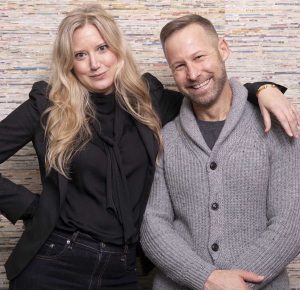 Mara Evans and Bowen Mendelson came aboard last month as vice presidents and creative directors. They will lead the SunTrust and Southeast Toyota accounts, respectively, with both reporting to O’Rourke.

Mendelson comes from Leo Burnett Chicago, where he has VP/CD. But he has worked in Atlanta in the past, and his most significant work may have been leading the Coca-Cola account for McCann subsidiary FitzCo. He created the Delta Middle Seat Lounge project in addition to the Coke “1,000 songs” initiative that included unique tunes dedicated to 1,000 different names appearing on personalized soda bottles. He must have a musical mind, because he also worked on the Pandora lovemaking music project while serving as CD at Ogilvy.

On the client side, he was a copywriter for Uber, and his work has won Cannes Lions, D&AD pencils and Best-In-Show at Radio Mercury, among other awards.

“We have fantastic clients, a fantastic product and a wealth of smart, talented people at 22squared who touch this important piece of business,” said Mendelson regarding the Southeast Toyota account before adding that he wants to “bring more than just great broadcast to the table.”

Evans has an even more varied background, most recently serving as senior consultant and CD at Atlanta-based underwear brand Spanx.

“I came to 22squared to lead creative for SunTrust which is very close to my heart considering I still have my old, original Trust Company t-shirt from when I opened my very first savings account in Rome, GA,” she said.

The new CD started her ad career at SpikeDDB and later worked at Anomaly, Ogilvy, Y&R and CPB before going client-side as global brand creative director at Toms. She and her husband Jonas Elrod also created Wake Up, a documentary about spirituality that debuted at SXSW in 2009 and later aired on Oprah Winfrey’s OWN network.

“We’re in a period of rapid growth, which means we’re adding a lot of new people to the mix,” said O’Rourke of the new hires. He described Evans as “a person who is deeply fulfilled by introducing new ideas and understandings to the world” and noted that Mendelson “thinks about how people’s experiences affect their understanding of the world [and] uses that understanding to connect with them on a deeper, more meaningful level.”

Here’s one of the agency’s most recent campaigns for client AdventHealth.