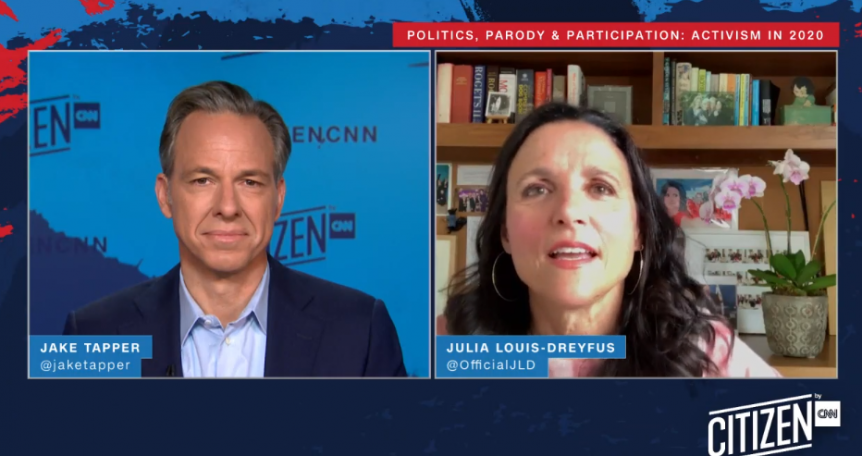 The Citizen by CNN session, Politics, Parody and Participation: Activism in 2020, featured The Lead’s Jake Tapper and actress/activist Julia Louis-Dreyfus.

The former Seinfeld and Veep star is known for her activism and support of the Democratic party. She promoted her powerthepolls.org group throughout the session, and said she has gotten roughly 35,000 people to sign up to be poll workers this November through the effort, which she says is nonpartisan.

Among the questions Tapper asked Louis-Dreyfus was what it was like to host the final night of the virtual Democratic National Convention, a broadcast seen by millions of people. Her answer might surprise you.

Tapper: You are a Democrat and you’re a Biden supporter and you notably emceed the fourth night of the Democratic Convention. How did that happen and how did you prepare?

Louis-Dreyfus: Yes. How did that happen? Well, they asked me to do it and it was a number of phone calls, because I was super nervous about it, because to be honest with you, Jake, that’s not what I do. I’m not like an M.C. I’ve been asked to do things like this in the past and I’m like, oh, I can’t do it. I’m not—that’s not my strong suit. But in this case, I’ve known Joe Biden for a really long time now actually, and I believe in what he’s doing and his message and his leadership, and I don’t believe in the—what the other side is doing is democratic right now.

So I thought well, I have to sort of rise up, this is my patriotic duty to help out, and I was really happy to do so, albeit absolutely terrified. I mean … I was so scared because all of a sudden it’s not like you’re just, I don’t know, trying to entertain or make jokes and blah, blah, blah. There was some—there was heft behind this, and that’s why I think I was scared.

I felt like I was sort of in the trenches, so to speak, and so—and I will also say that after I did the first segment of that evening, I got a nice text from you that was very meaningful because you said something nice like, oh, you did a great job or blah, blah, blah, something like that and I was like—because of Covid, the protocols were intense and I was on a sound stage with two camera operators and a stage manager.

And my husband, Brad, who was helping write and sort of tweet things with two other friends, Dave Mandel and Billy Kimball from Veep, whom you both know, and so it was a very, very tight group and it wasn’t like you were playing to anybody in the room. So, the whole thing was—it was—normally when you do things like that, there’s an audience, there’s a crew of 100 people, that was not the case.

So it felt very—it had as surreal quality to it, but at the end of the day, and that most importantly, really the only important thing is that I thought Joe hit it out of the park that night, and I was just so—I was just so thrilled to be a part of that as a result, so thrilled.