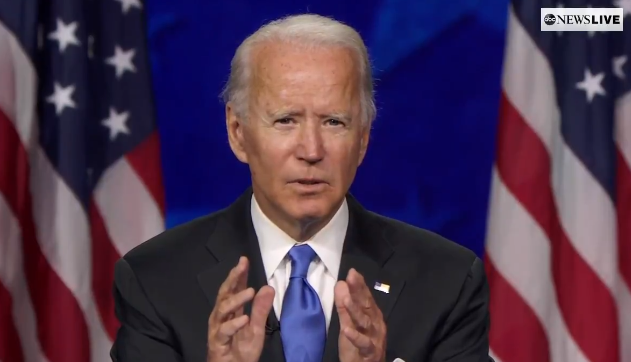 It’s official: Joe Biden became the 2020 Democratic Party nominee for president of the United States, and he gave what sounded like a presidential address last night.

Biden closed the four-day Democratic National Convention with a passionate speech at Chase Arena in his hometown of Wilmington, Del., that was, as NBC News’ Savannah Guthrie remarked, “part fireside chat, part ‘fervency of the moment.'”

CBS News’ John Dickerson said that Biden‘s speech showed him taking “the exact opposite” approach to Covid-19 that President Trump has shown: “He took his personal suffering throughout his life, and he spoke directly to the families of those 170,000 Americans who have lost their lives.”

Fox News’ Dana Perino was impressed, saying, “Joe Biden just hit a home run in the bottom of the ninth.”

Bret Baier added: “He’s not known for his public speaking, but this, having seen him speak on the stump many, many times, was the best he’s been as far as his delivery,” adding, “This is what he needed to do for this crowd and for the crowd around the country. The question was, was it enough to affect this race and give him a bounce.”

From CNN’s David Axelrod: “He didn’t look like a guy who was reading a speech. He looked like a president speaking to the country. He owned those words. It was clear he felt those words. He expressed confidence. He brought the indictment against Trump, but he spoke with confidence about the way forward and gave, I think, people watching the confidence that he had the energy and the vision to take them forward.”

Night 4 didn’t feature the political star power that the previous evening delivered, but Biden delivered his own type of star power. The night instead featured a deep bench of fellow 2020 Democratic presidential candidates and one of Biden’s finalists for his vp, including Sen. Cory Booker, Pete Buttigieg, Sen. Tammy Duckworth, Andrew Yang and Michael Bloomberg, before the former vice president closed the evening.

Needless to say, Biden received a ton of support from the party over these past four days.

The scene outside Chase Arena in Wilmington resembled that of a drive-in movie theater, with scores of cars parked in the lot outside the arena, watching the final night of the 2020 DNC on a big screen.

DNC Chair Tom Perez: “Next week, it’ll be the Republican Party’s turn to hold their convention. On behalf of their speakers and staff, I hope their organizers will take safety as seriously we have.”

Off we went with remarks from Yang, an amusing, if not slightly awkward back-and-forth between him and moderator for the evening Julia Louis-Dreyfus. The Veep/Seinfeld star made some politics-focused quips, including a zinger at Fox News.

Julia Louis-Dreyfus: “I cannot wait to see her debate our current VP, Mika Pince. Or is it Pance?”

Julia Louis-Dreyfus at the DNC: “If we all vote there is nothing Facebook, Fox News or Vladimir Putin can do to stop us.”

Will be interviewed by @seanhannity tonight at 9:00 P.M. Enjoy! @FoxNews

Julia Louis-Dreyfus: “Joe Biden goes to church so regularly that he doesn’t even need tear gas and a bunch of federalized troops to get him get there.” #DemConvention pic.twitter.com/2lN8qazhXo

But for Louis-Dreyfus, this wasn’t all fun and games. She brought up the fact that she is a cancer survivor herself, and has since struck up a friendship with the former vice president, who has dedicated much of his recent public work to the Cancer Moonshot Agenda, which endeavors to end cancer.

Next, the National Anthem performed by The Chicks (formerly known as The Dixie Chicks) followed by remarks from Sen. Chris Coons of Delaware, a good friend of Biden’s who spoke at length about his faith, calling him a “man of faith and conscience.”

Louis-Dreyfus tossed it to Mayor Keisha Lane Bottoms of Atlanta, who spoke about the importance of voting, race and the late Rep. John Lewis.

The video was followed by a performance from John Legend and Common, who sang “Glory,” their Oscar-winning song from the 2014 movie, Selma.

Then, the presidential historian Jon Meacham gave remarks about the historical implications of electing Biden over Trump. Meacham was followed by Rep. Deb Haaland from New Mexico, beaming in from the indigenous lands outside of Albuquerque. She represents tribal nations, and is one of the first Native American women elected to Congress.

Later, Sen. Cory Booker gave remarks. Biden then conducted a roundtable with a member of the UAW, IBEW, a fireman and a bus driver about their experiences in the middle class and infrastructure.

Following were the former surgeon general Vivek Murthy and Sen. Tammy Baldwin from Wisconsin, both of whom spoke about the impact of Covid-19 and how they felt Biden would be the candidate to provide superior leadership in the fight against the disease.

In the course of my career I have had the privilege of interviewing so many political leaders. After I recently interviewed Joe Biden, he called my sons who were at home in NY to thank them for supporting their single working mom. They were thrilled.

After Pete Buttigieg spoke from Indiana, he tossed to Sen. Booker, who led a taped Zoom call featuring 2020 presidential candidates talking about their times on the trail, and about their experiences with Biden: Sen. Amy Klobuchar, Yang, Sen. Booker, Sen. Elizabeth Warren, Sen. Bernie Sanders, Buttigieg and Beto O’Rourke.

Next, former New York Mayor Mike Bloomberg, who reminded viewers he been a registered Democrat, a Republican and an independent, made a case for Biden’s economic proposals while slamming Trump.

The second-biggest star of the night was Brayden Harrington, a 13-year-old from New Hampshire. Harrington has a speech impediment and he recalled meeting Biden and talking about their shared experience. He did a heck of a job delivering to the nation live. As someone who also has a speech impediment, his struggles hit very close to home, but it was beautiful and inspirational to watch him pull it off.

In a video for the DNC, 13-year-old Brayden Harrington recalled meeting Joe Biden earlier this year: “He told me that we were members of the same club. We stutter.”

Biden has spoken openly about his struggles with the speech disorder throughout his career https://t.co/k9OD94MaTp pic.twitter.com/w0AwIixnHT

Then, it was Biden’s time to talk. His speech might have seemed long, but according to C-SPAN, it ended up being the shortest amount of time for a nomination acceptance speech since 1984.

.@JoeBiden‘s acceptance speech is shortest at a #DemConvention since ’84.

“The current president has cloaked American anger for far too long. Too much anger, too much division. Here and now I give you my word—if you entrust me with the presidency, I’ll draw on the best of us, not the worst.

“I’ll draw on the light, not the darkness. It’s time for us, for we the people to come together, and make no mistake, we can and will overcome this season of darkness in America. We’ll choose hope over fear, facts over fiction, fairness over privilege.”

He spoke at length about the coronavirus.

“Our economy is in tatters, with Black, Latino, Asian American and Native American communities bearing the brunt of it. And after all this time, the president still does not have a plan. Well, I do. If I’m president on day one we’ll implement the national strategy I’ve been laying out since March. We’ll develop and deploy rapid tests with results available immediately.

“We’ll make the medical supplies and protective equipment our country needs. And we’ll make them here in America. So we will never again be at the mercy of China and other foreign countries in order to protect our own people. We’ll make sure our schools have the resources they need to be open, safe and effective.”

He spoke about racism:

“Just a week ago yesterday was the third anniversary of the events in Charlottesville. Remember seeing those neo-Nazis and Klansmen and white supremacists coming out of the fields with lighted torches? Veins bulging? Spewing the same anti-Semitic bile heard across Europe in the ’30s?

“Remember the violent clash that ensued between those spreading hate and those with the courage to stand against it? Remember what the president said? There were, “very fine people on both sides.” It was a wake-up call for us as a country. And for me, a call to action. At that moment, I knew I’d have to run.”

“May history be able to say that the end of this chapter of American darkness began here tonight as love and hope and light joined in the battle for the soul of the nation,” Biden concluded. “And this is a battle that we, together, will win. I promise you … God bless our troops.”

Here were some reactions:

After @JoeBiden‘s incredible speech tonight, Democrats across the country EXHALED. We went from “anyone but Trump” to “THIS GUY IS FOR US!”

We are no longer settling for Biden. We are FIGHTING for him. #BidenHarris2020 #DNC2020 #DemConvention https://t.co/CTnxp90Jwp

Joe Biden just showed that he’s the leader who will meet this moment.

He and Kamala Harris will bring our country together, restore dignity to the Oval Office, and tackle the unprecedented challenges we face.

Better days are ahead. Joe and Kamala will lead us there. Vote!

Well, at least the entire Trump campaign hasn’t been premised on the idea that Joe Biden can’t give a speech.

Joe Biden isn’t naturally eloquent, but this was one of the best speeches I’ve seen him give. He projected decency and expertise, and he simply came across as presidential. I was also struck by his mention of FDR and his effort to offer hope in a difficult time.

That Biden speech did not seem very sleepy.

Fox News panel with Wallace, Hume, Rove, and others all pretty much unanimously agree that Biden excelled in his speech. (Of course, don’t expect Fox talk show hosts such as Hannity and Ingraham to echo this.)

Tonight @JoeBiden made the choice for America very simple. Continue on this path of anger, division, corruption and darkness — or choose to be better, find the light, restore our common decency, and make America good again. #DemConvention

Biden’s speech is getting heaped w/praise by many Dems & analysts who dismissed him last year when he was saying much the same (minus coronavirus).

At Philly kick off May 2019: “The single most important thing we have to do to accomplish these things is defeat Donald Trump.”

Conservative critiques of the address:

What we’ll hear about next week that we didn’t hear much of this week—China, violence in the streets, how long Joe Biden has been in Washington

Other than a national mask mandate, Biden has still not laid out a plan for anything. “Broadband” and “rapid testing” and “we’ll tackle climate change” isn’t a plan. It’s a series of words and aspirations.

Joe Biden is the ultimate Washington insider – a half century in government and very little to show for it. President @realDonaldTrump is still the outsider, disruptor, change agent in this race and the one man standing between us and the radical left.

Glad that Joe Biden and Kamala Harris were able to get fireworks and an outdoor victory lap with the drive-in audience at the end of tonight’s #DemConvention. That was a really nice touch. pic.twitter.com/QMH83tiQ3H

Good morning after from print media:

Front page of the Scranton Times-Tribune the day after @JoeBiden accepts the Democratic nomination and @realDonaldTrump paid a visit. pic.twitter.com/0o2ueqHlRd

“I’ll be an ally of the light, not the darkness”

“Battle for soul of nation”