Raise your hand if you use someone else’s Netflix, Hulu Plus, or Amazon Prime account to stream shows. Thought so.

New research from The Diffusion Group (TDG) shows that more than 20% of broadband users streaming video from an online subscription service use another person’s credentials (someone outside of their own household). 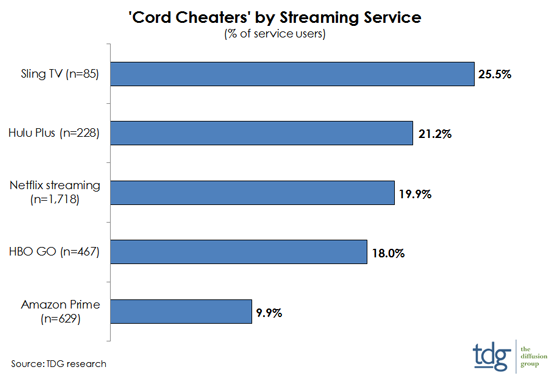 In what is perhaps both complimentary of and worrisome for Dish, Sling TV users are the most flagrant offenders. 25.5% of those accessing Sling TV use another person’s credentials. Hulu Plus came in second place with 21.2% while Netflix came in third with 19.9%.

“While it is widely acknowledged that ‘cord cheating’ is occurring, few comprehend how widespread the behavior has become,” said Michael Greeson, TDG Founder and Director of Research. “This behavior reflects the unfortunate mindset among many of today’s media users that it’s perfectly acceptable to ‘share’ digital media — whether files or service access — among friends and family. Why should my daughter pay to stream Netflix when she can simply use my credentials to access the service with little fear of reprisal?”

Many have thought that providers would wait to build numbers before cracking down on ‘cord cheaters’ but this has not been the case. With so much competition, it is still a user numbers game for providers, and it may be awhile before we see any significant enforcement. Until then, these percentages are sure to rise.