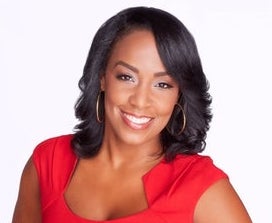 Johnson replaces Tisha Powell, who retired from the station at the end of June, and will join co-anchor Steve Daniels at 5, 6 and 11 p.m. and at 10 p.m. on CW22 later this month.

“I’m beyond thrilled to plant permanent roots here and find my new home,” Johnson told the News & Observer. “Just last week, I saw the headline about the area being ranked No. 2 on a ‘best places to live’ list and I am not at all surprised. I am inspired by the work being done in the Tri-cities and thrilled to meet and know the visionaries bravely guiding the area into the future.”

Johnson comes to Raleigh from WTFX in Philadelphia where she helped launch the weekend edition of Good Day Philadelphia. She started her career in Orlando, Fla. as a reporter at Central News 13 and went on to work as a health reporter at WHBQ in Memphis, Tennessee. She later went back to Orlando to work at WOFL

“Lauren is a talented, compassionate and seasoned journalist who is a truth-seeker for all people,” said WTVD news director Bervette Carree. “Her ability to authentically connect with people is a unique and appreciated trait in our industry.”