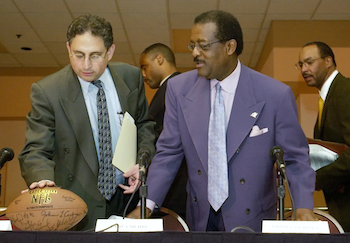 The owners of Indianapolis station WISH sued Dish Network and AT&T for discrimination one year after after buying the station from Nexstar in 2019.

In its lawsuits, the station group claimed both AT&T and Dish changed how they approached retransmission fees once the station changed ownership from Nexstar to Circle City.

Now, station owner Circle City Broadcasting is saying it has added heavyweight civil rights lawyer Cyrus Mehri to its legal team to drive home its case that it’s being discriminated against because its founder and president, DuJuan McCoy, is black.

Merhi said he wants to advance justice in all industries.

“I think there was a period in time where we thought we were in a post-racial America, that we had somehow achieved equal opportunity. But, I knew from our clients that we hadn’t,” Mehri said. “I’ve seen it across industries. I’ve taken on Madison Avenue and saw the race discrimination there. I’ve seen it in financial services, racial discrimination there. It’s in journalism. It’s in all aspects of our country right now, but we can overcome it. I actually feel right now more hopeful than I’ve ever felt about we can make this progress.”