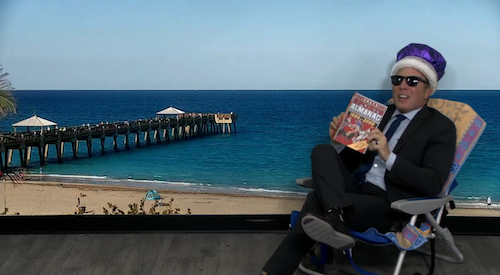 WPEC morning anchor Matt Lincoln lost a bet and some sweet, sweet sleep—all because of the NCAA March Madness tournament.

The specifics of the bet between the West Palm Beach, Fla. morning anchor and evening anchor Jim Grimes wasn’t revealed, but if Grimes won, Lincoln, who normally goes on-air at 4:30 a.m., had to come in early and fill in on the 11:00 p.m. newscast. (If Grimes lost, he’d have to appear on the morning show.)

Because Lincoln lost, he anchored the evening show, while Grimes got to take a break from his work duties. Grimes did make an appearance later in the newscast wearing a purple winner’s crown, relaxing in a beach chair by the water. (With that said, he was still wearing his suit, and he looked suspiciously like he was in front of the green screen.)