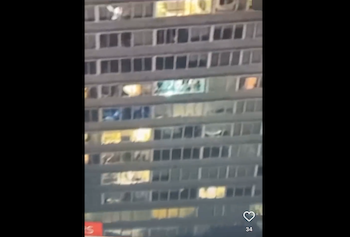 While the station showed an apartment complex where police were searching for suspects, one local man zoomed in to show what was going on in the individual apartments—and came across a couple making their own fireworks in a way the FCC would not have approved. He then tweeted it out.

A quick check of TVEyes showed the station stayed on the shot for about 30 seconds before going to b-roll of the shooting scene. In the station’s defense there’s little chance they saw what was happening.

*To be clear—the station was on a wide shot the whole time. The guy who tweeted the NSFW video shot it off his TV screen. That’s how he was able to capture the zoomed in view. The close up shot alone never aired.