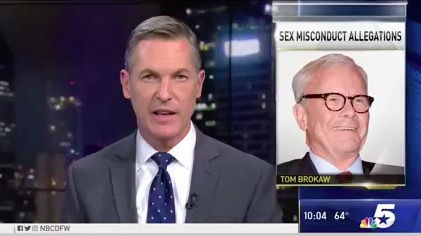 Tom Brokaw, who anchored Nightly News on NBC affiliates across the country for 21 years, was the news on many late local newscasts tonight, including some NBC-owned stations.

Brokaw was accused of sexually harassing a then-28-year-old NBC News correspondent in 1994.

KXAS in Dallas also reported the news, as did WFLA in Tampa, where Vester also worked before joining NBC News in 1993.

TVNewser has more on the allegations, as first reported by Variety. Brokaw denies the charges.

In the New York market, WNYW and WABC both reported the story. In Los Angeles, the story was in the 6 p.m. newscasts on KCBS and KTLA and the 8 p.m. news on KCAL. KNBC, as well as the NBC News bureau, broadcast from the Tom Brokaw News Center in Universal City.

Fox News Channel also reported the news tonight. CNN and MSNBC did not. Brokaw was on NBC last weekend, covering the funeral of Barbara Bush.