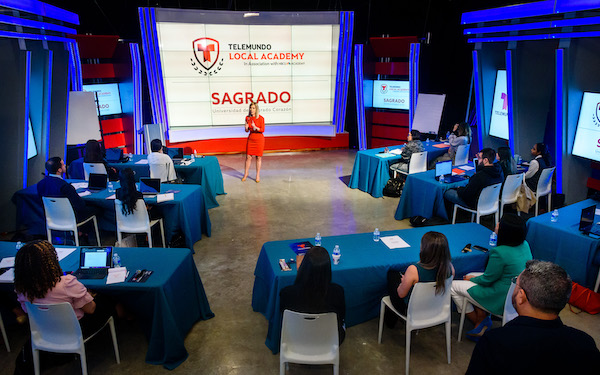 “Cal State Northridge has a proven track record of preparing students for jobs in journalism,” said Ozzie Martinez, senior vice president of news, Digital and Standards, Telemundo Station Group. “We’re excited to team up with Professor Bowen and CSUN’s Journalism Department to help identify and train the next generation of bilingual journalists and newsroom professionals, give them the tools they will need to have successful careers at our TV stations—and help us better serve our ever changing diverse audiences and communities.”

The one-year program kicks off at CSUN in September 2022. Launched in fall 2017 as a pilot between the Telemundo Station Group and the University of Florida’s journalism school, the program has expanded to the University of Texas at Arlington and la Universidad del Sagrado Corazón in Puerto Rico. This June, a dozen of Telemundo Local Academy graduates from partner colleges/universities moved on to full time newsroom roles at Telemundo owned stations.

“We are excited to partner with the Telemundo ​Station Group to make their program available to our students,” said CSUN president Erika D. Beck. “There are graduates from CSUN’s journalism program working in Telemundo stations in at least six states and the District of Columbia—and in nearly every newsroom in the country. This partnership underscores the important role bilingual journalists ​serve in educating the public about news from our communities and around the world. With the skills they will gain through this partnership, CSUN graduates will be at the forefront of telling those stories to Spanish-speaking audiences in key markets across the United States.”

CSUN’s Journalism Department has about 400 undergraduate and graduate students, nearly 60 percent of whom are Latino. Broadcast students were producing Spanish-language and bilingual news and long-form programming Noticias del Valle (News from the Valley) prior to the 2006 inception of its Spanish-language minor curriculum. The effort has continued, with specialized reporting in radio, television with En Otras Palabras (In Other Words) and digital media, including the student-run El Nuevo Sol website.

“My broadcast colleagues and I are excited to see our long-standing relationships with the Telemundo stations, including KNBC and KVEA, move into the next phase with this partnership,” said Prof. Linda Bowen, Journalism Department chair, CSUN. “The Telemundo Local Academy program aligns well with our program. It will be life-changing for our students—and will significantly broaden their career opportunities in major Spanish-language markets here and across the country.”

Applications for Telemundo Local Academy are accepted by all four participating University partners on a rolling basis. All applications are reviewed by a selection committee that includes participating college professors and NBC/Telemundo station newsroom professionals.