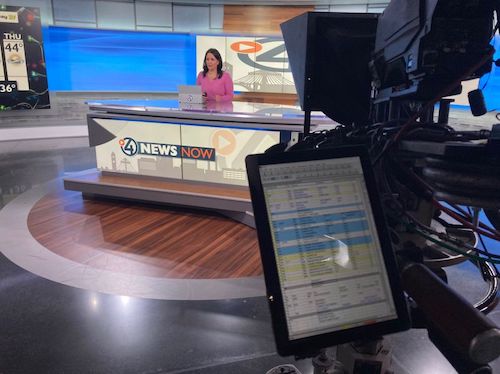 KXLY news director Melissa Luck gave her morning anchors a Thanksgiving gift by filling in for them after giving them the day off.

“It’s been at least 3 years since I anchored a newscast and probably 10 since I anchored the morning show,” Luck wrote on LinkedIn. “I gave our morning anchors the day off today and took my turn on the desk. It’s a great way to see how it’s going behind the scenes.”

Luck joined the Spokane ABC station in 2002 as a general assignment reporter and has worked as a weekend anchor and continues to fill in on the anchor desk from time to time. She was named news director in 2017.

She told TVSpy that morning co-anchor Robyn Nance is “dealing with some tough stuff this year, as her mom is battling cancer and receiving chemo treatments halfway across the country.”

“We ended up giving Robyn the week of Thanksgiving off so that she could go be with her mom,” said Luck. “Our other morning anchor Derek Deis was going to have to work Thanksgiving AND Black Friday. He didn’t complain, but a day or two before, I told him just to take Black Friday off and I would anchor the newscast.”

Deis—who also happens to be Luck’s husband— was also celebrating his birthday, which was on Thanksgiving. Since his family was in town, “I told him to hang out with them and not worry about going to bed early to wake up to anchor,” Luck said.

The decision “didn’t feel like a big deal” in the newsroom where she said the motto is “take care of the team,” she added.

“They all know that their family lives and personal emergencies are more important than a day of work, so they give grace to others when things arise,” said Luck. “I would have rather had one of our other journalists who doesn’t get as much anchoring time take over the show, but we didn’t make the change with Robyn until close to the holiday and I didn’t want to screw up anyone’s plans.”