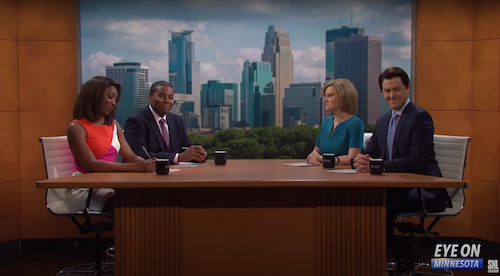 Saturday Night Live opened its show this weekend with a sketch about a local news station that revealed the differences between how white and Black Americans view recent news events.

While the panelists seem to agree on topics like the Derek Chauvin trial, they soon realize they can’t agree on their predicted outcomes of the case. Further hijinks ensue when they can’t agree on whether they’re talking about rapper DMX or England’s Prince Philip when bringing up the prince who died recently.

At one point Alex Moffat’s character asks Thompson and Nwodim’s characters, “You guys can at least admit this country has made a lot of progress recently, yeah?”

“For who?” asks Thompson.