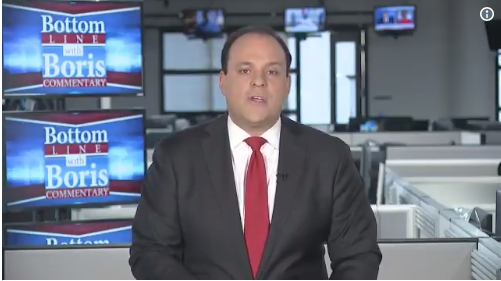 On Wednesday night, Sinclair Broadcast Group addressed the controversial commentary segment that aired on several of its stations earlier this week in which chief political analyst Boris Epshteyn defended the use of tear gas on migrants at the border on Sunday.

Epshteyn, a former Trump White House official, said in the segment that U.S. authorities “had to use tear gas” on the migrations attempting to cross the border near San Diego, explaining that they needed to prevent an “attempted invasion of our country.”

As controversy swirled around the segment, Sinclair said in a series of tweets Wednesday night that “the opinions expressed in this segment do not reflect the views of Sinclair Broadcast Group,” adding “when Boris’s segments are aired on our stations, they are labeled clearly as commentary.”

We’d like to take a moment and address some concerns regarding a commentary segment by @borisep that was aired on Sinclair stations this week. The opinions expressed in this segment do not reflect the views of Sinclair Broadcast Group.

If you have any concerns about any of our content, we genuinely want to hear from you: https://t.co/fHYqYwcRCR. Above all, we are committed to fair, unbiased journalism across our stations nationwide and are truly honored to serve our communities. Local news always comes first.

Sinclair has previously come under fire for its “must carry” segments, many of which feature Epshteyn. In other instances, local news anchors at Sinclair stations must recite the same script, sent to them by corporate. That practice that came to light in April, when Deadspin assembled a supercut in which dozens of anchors call out “one-sided news stories,” and accuse “some media outlets” of publishing “fake stories without checking facts first.”

The company owns or operates 193 stations across the country, in mostly small and medium-sized markets.