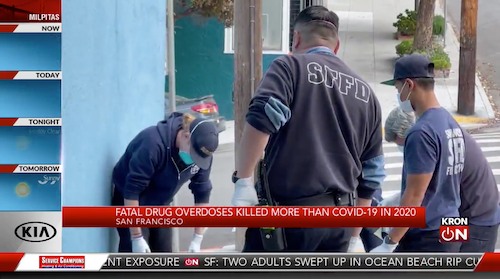 KRON reporter Maureen Kelly saved a young man’s life this week after treating him for a suspected overdose.

Kelly, who has worked at the San Francisco station for more than 14 years, said she was on a walk in Potrero Hill when she saw someone calling 911 for a man who was unresponsive and turning blue.

Before the paramedics arrived, she treated the unresponsive man with Narcan, which is used to treat opioid overdoses. She had a box of the nasal spray in her car for emergency situations.

“I think I just saved a life today,” Kelly tweeted after the incident. “#SFFD gave me a replacement narcan after the young man who is no longer blue was carted away.”

“Today this young man won’t be joining the grim tally of fatal accidental overdoses this year that is already looking to set a record we don’t want,” Kelly said in a report about the incident.