NEXT:News 12 Sues Meteorologist Who Bailed Before His Contract Was Up
PREVIOUS:Fresno Anchor Catches Covid for Second Time 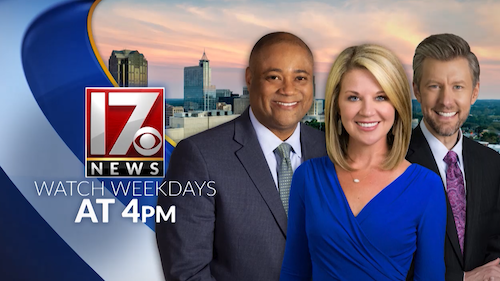 CBS 17 News at Four will be anchored by Angela Taylor, Rod Carter and chief meteorologist Wes Hohenstein.
The team will also continue to anchor at 5, 6 and 11.

The new show will have more local stories and “a fresh new look,” said news director Ed Trauschke. “We’re placing even greater emphasis on local weather, providing viewers with a forecast every 10 minutes.”

The Nexstar owned station also announced some programming changes. The Young and the Restless is moving to 12:30 p.m. right after the Noon newscast while locally produced lifestyle show, My Carolina moves to its new time at 9 a.m., followed by Let’s Make a Deal and The Price is Right.

“The new CBS 17 News at Four is unlike any other newscast in the market,” vp and gm John O. Lewis. “Our emphasis on more local stories and more weather offers our viewers something unique. We’re also excited to have My Carolina airing at 9am and The Young and the Restless at 12:30pm. It’s a new look for the new year on CBS 17.”