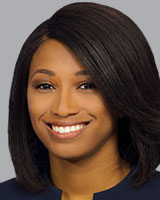 It’s a big market jump for the Raleigh-Durham, N.C. meteorologist, who has been with the station since 2017, but it’s not the first time she will be covering weather from New York. She filled in on weekends for Good Morning America during the summer of 2019, and she often appears on World News Tonight to report on national weather events, according to The News & Observer.

“I gained some lifelong friends here, including the guys on the weather team. I will miss you all. This time with you guys has been such a blessing to me,” Bell said on Twitter. “I’m looking forward to joining the weather team full time at WABC. It’ll be an honor to work at a station with such a storied legacy.”

Bell started her career as a freelancer at WMC in Memphis during college. She went on to work at KHBS-KHOG in Fayetteville, Ark. and WAPT in Jackson, Miss.