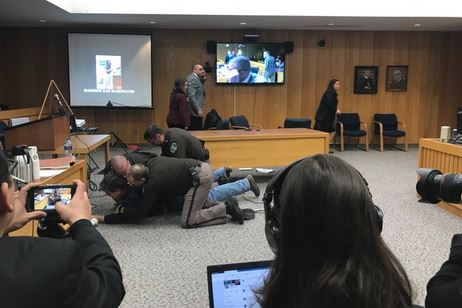 Local and national news reporters had their smartphones rolling a few minutes ago when Randall Margraves, the father of three girls abused by Larry Nassar, lunged at Nassar during another sentencing hearing.

“I want that son of a bitch. Give me one minute with him,” Margraves was heard saying.

Randall Margraves’ three daughters, Madison, Lauren and Morgan, have all spoken during the hearings. When the judge denied Randall Margraves’ request for “5 minutes in a locked room with this demon,” he lunged at Nassar and was tackled by deputies.

Nassar was sentenced to up to 175 years in prison in an Ingraham County, MI courtroom. Today’s hearing is being held in neighboring Eaton County.

The father of Margraves asked the judge to speak, asked the judge for 5 minutes alone in a room with Nassar, when the judge declined, he ran at Nassar. Deputies had to tackle him. pic.twitter.com/FgP8QG3cOR

Some video of Margraves being handcuffed by law enforcement. pic.twitter.com/sVOar0Hhhu

Court is taking a slight break after Randall Margraves, father of Madison and Lauren Margraves is removed from the court room. pic.twitter.com/jl7a244VPJ

Police are holding Margraves down and handcuffing him, asking him to calm down while he continues to yell "one minute. One minute," and "what would you do if it happened to you, to your daughter?" #LarryNassar

"I trusted you, my parents trusted you, my two sisters who also had unfortunate experiences with you trusted you. I fear I will never trust another man again." — Lauren Margraves #LarryNassar survivor