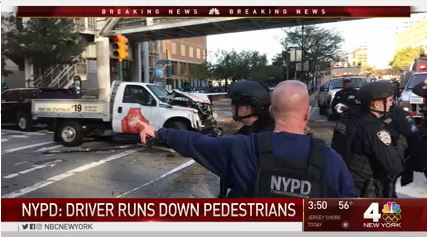 New York’s local news stations, as well as network cable news channels, have broken in to cover a terror attack in Lower Manhattan. Around 3:15 p.m. a man drove a rented Home Depot pick-up in the bike lanes along the West Side highway. This all happened just two blocks from the World Trade Center.

The suspect struck bicyclists before ramming into a school bus near an elementary school, P.S. 89, on the north end of the Battery Park City neighborhood. The suspect was shot and taken to a nearby hospital. At least 8 people are dead and a dozen injured.

All the stations have sent multiple crews to the location and news choppers are flying overhead, though across the river in Jersey City, NJ, and zooming in to the activity in Manhattan. The FBI and joint terror task force is also on the scene.

Today show co-anchor Savannah Guthrie, who lives nearby, is among the reporters on the scene. “Obviously, this story broadens out from being a big local story. This is a story with national ramifications hence the enormous media presence,” said reporter Gus Rosendale during WNBC’s coverage.

"I seen a couple of bodies laying right there in the bike path…” – Eyewitness tells @ABC7NY​ about NYC incident. https://t.co/9X6Xc1hweR pic.twitter.com/DfCS6VZTpY