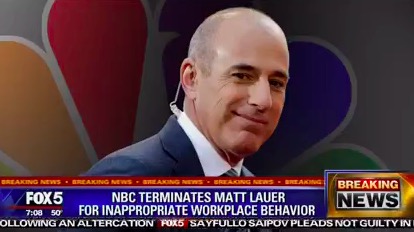 He’s spent the last 20 years as co-achor of NBC’s Today show, but, like many network anchors, Matt Lauer got his start in local news.

Lauer got his start in TV as a producer at WOWK-TV (CBS) in Huntington, West Virginia. In 1980, he was named a reporter for the 6 and 11 o’clock newscasts. He then moved on to bigger markets hosting magazine-style shows. He moved to New York in 1984 anchoring PM Magazine for WNEW (now Fox5). In 1988 he moved to Boston to host WNEV’s (now WHDH) Talk of the Town.

He returned to New York in 1989 to co-host WWOR’s morning show. Lauer then moved to WNBC in 1992 to co-host Live at Five. That exposure led to filling in as newsreader on the Today show. He eventually got the job permanently and, in 1997, was named co-anchor of Today.

This morning, Lauer is the news on all those former stations he’s worked.

On WNYW’s morning show, Rosanna Scotto reported the news minutes after it broke on Today. “Sad news. Breaking right now. Matt Lauer–I’m going to just say it–he is a friend of mine. I’ve worked with him. I’ve known him for many years. NBC has fired him.”