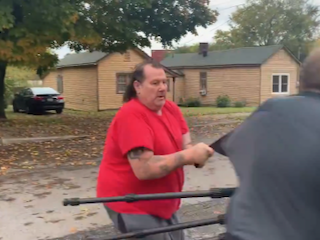 A crew in Nashville, Tenn., was collecting footage for a feature story when a man aggressively approached them and assaulted one of them, completely unprovoked.

Caresse Jackman, a consumer investigative reporter with WSMV, was with her photographer in the field collecting footage for an upcoming story outside an elementary school when the attack, captured on video, occurred. In the video, Jackman is seen looking at the unknown man approach her and asking if he was all right, and then asking him to stand back. The man continues to approach them, grabs the camera, swings at the photographer and grabs onto the photographer’s shirt. Both the photojournalist and Jackman documented the attack.

“I grabbed my phone to document it and told the man to leave my colleague alone,” Jackman tweeted on Monday night. “The man then punched my co-worker. We got away, went to a safe location to call our managers and also called police. We’re okay. If you’ve seen this man or know him—please call MNPD [Metropolitan Nashville Police Department].”

In the video, the unidentified perpetrator isn’t saying anything other than “I told you” at one point.

The station is asking the public to help identify the man.

While shooting video for a feature story-a man from across the street kept looking our crew. We never said a word to him. I got out of the car to record. He started to approach me. My photog tried to get his attention so he wouldn’t come my way. The man then attacked us. @WSMV pic.twitter.com/jXci2WllYK