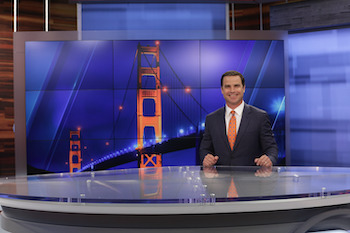 Mibach replaces Frank Somerville, who left the station after a year that included a bizarre on-air incident that saw him leave a show early—and a suspension after disagreeing with news management about coverage of a high profile murder case.

“Mike is a dedicated storyteller who cares deeply about the community and our role as journalists in the Bay Area,” vice president and news director Amber Eikel. “I’m proud to have him on our team and look forward to him representing our work and values on ‘The 10 o’clock News.’”

Since 2005, Mibach has anchored the weekday and weekend morning shows, the Noon newscast, the 4 p.m. news and has reported for various station newscasts. Before joining KTVU, he was a reporter and weekend evening anchor for KVOA in Tucson, Ariz. He began his career at WIBW in Topeka, Kan.

“KTVU has been a part of my life for nearly five decades; from growing up in the Bay Area as a viewer, and for the last 17 years as a reporter and anchor,” said Mibach. “It’s an absolute honor to be trusted to deliver stories in a way that continues the legacy of journalistic excellence for which KTVU has always been known.”